By MARK CORROTO
December 20, 2016
Sign in to view read count 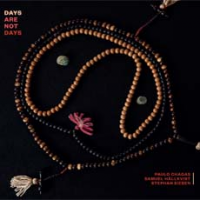 When an improvised recording presents itself as a meteor, some foreign object from another civilization, like Days Are Not Days does, we should rejoice that it has entered our atmosphere and like a bolide, exploded upon contact.

Okay, this recording by Portuguese saxophonist and flutist Paulo Chagas, and guitarists Samuel Hällkvist, from Sweden, and Stephan Sieben, from Denmark, isn't a bomb. It is, though, an improvised explosive device, pieced together from chamber music debris, ambient dregs, noisy scraps, blues flotsam and rock jetsam.

This trio was organized by Hällkvist for a festival in Portugal in 2014, and soon after recorded this session under the supervision of famed guitarist and producer David Torn, who has overseen discs by Tim Berne and Dave Douglas. Like Torn's Only Sky (ECM, 2015), this set juxtaposes harshness with mildness. Even the titles mash. "Era um nevoeiro e um sapo, dos jogos de computador, do spectrum, dos xizes e das cruzinhas, das várias vidas por bater" translated from the Portuguese "It was a fog and a frog, computer games, the spectrum, the exes (x's) and little crosses, of the various lives to beat," opens with spacey guitars and upper register saxophone squeal developing into an almost ballad that is then opened up into circular breathing saxophone and some conspicuous guitar shred. The noisy merger soon becomes a sort of meditative mantra of sound, then an imagined dance piece that implodes. The delight here is the fabrication of sounds. From the touch tones to the thunder, guitars (and woodwinds) extend their vocabularies to conjure in the mind's eye imagined spacetime and the possibilities of things beyond our meager three dimensions.

Golfinhos, mas também becos Escuros (Dolphins, but also dark alleys); Um mergulho de um penhasco, e se fosse um reflexo, um vapor entre dentes, a trincar a nuvem, voando na tempestade, no mau tempo, entre meteoritos (A dive off a cliff, And if it were a reflection, a steam between teeth, to bite the cloud, flying in the storm, in bad weather, In between meteorites); Era um nevoeiro e um sapo, dos jogos de computador, do spectrum, dos xizes e das cruzinhas, das várias vidas por bater (It was a fog and a frog, computer games, the spectrum, the exes (x”s) and little crosses, of the various lives to beat); Havia pessoas nesse planeta. era preciso sintonizar na praia e no espírito, onde havia ondas e marés (There were people on this planet. It was necessary to tune on the beach and In the spirit, which had waves and tides); Também era um caminho numa corda, num trapézio (It was also a way, a rope, a trapeze); O ar enchia, em tubo, entre uma gafarra e um balão. Era uma mensagem a caminho (The air filled in the tube, between a bottle and a balloon. It was a message on the way);