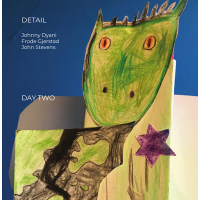 Detail was a band ahead of its time. The co-operative trio formed in 1981 by Norwegian reedman Frode Gjerstad and English drummer John Stevens, was completed in its first incarnation by South African bassist Johnny Dyani. Day Two was recorded in Gjerstad's hometown Stavanger, and as the name suggests, it was the result of the second day in the studio, following on from the session which generated Backwards And Forwards (Impetus, 1982). Originally released by Gjerstad as Okhela in cassette format on his own label, the two 20-minute cuts are issued in 2019 for the first time on CD by the Lithuanian NoBusiness imprint.

The disc showcases an ever-changing dialogue between the three principals, placed on an equal footing by the egalitarian mix, which is reinforced by several lengthy drum and bass interludes. There's something about the lightness and dance of Gjerstad's work on soprano saxophone which evokes Ornette Coleman. On tenor his voice is huskier, more reliant on overblowing and strangulated cries, although he's not averse to the odd melodic idea either. Dyani possesses an attractive, woody, forthright tone, often playing in a rapid cross between a strum and a pluck, while it's Stevens' chattering polyrhythms which provide the glue that binds Gjerstad and Dyani together.

Dyani's choices help define the two selections. On "Part I," he focuses on the higher notes almost exclusively. Gjerstad starts on soprano saxophone, sounding slightly tentative. There are occasional echoes between his stutters and Dyani's nagging iterations, but for the most part they sound as if they are on separate but parallel tracks. Even when the saxophonist drops out, the bass and drum dialogue continues unchanged, until Gjerstad rejoins on tenor. Another extended, more spacious bass and drum wind down finishes the piece.

On "Part II" Dyani explores the deep resonances of his instrument, as his melismatic slurs vie with Gjerstad's breathy tenor and then Stevens' drum murmurs in spare exchanges. Dyani's shift to a loping boom imparts movement, affirmed by the drummer's implied pulse, and Gjerstad spins out longer searching lines, in a passage of wailing free jazz. Tension builds as both bass and drums maintain a faster pace than tenor, but it doesn't resolve even when Gjerstad stops. The track concludes with Stevens mirroring Dyani's throbbing bass bombs with hihat flutters, all the while continuing to pulsate, tick and rattle on other parts of his kit.

In the liners Gjerstad (the only survivor of the three) wryly explains that Detail was too much jazz for the free music people and it was too far out for the jazz people. But in the intervening years, that territory has been recognized as some of the most fertile ground, and Detail one of the first groups to exploit it, making this reissue all the more significant.