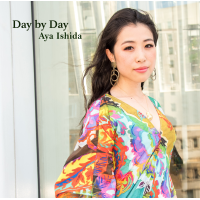 Aya Ishida has the kind of softly enveloping, fragile voice that can sing just about anything and make it instantly appealing. Her voice itself is an instrument, rising and lowering with the overall temperature of each track. It can soar or caress depending on the mood of the song. This New York jazz singer has a magnetic set of pipes, and her debut album Day by Day captures their ability to soothe the ears with crystalline production and tasteful musicianship. This is an accessible record, one that can attract fans outside of jazz. There's a definite pop influence in Ishida's voice, letting the hooks flow smoothly.

"Joy Spring" is brimming with sunshine and cool air. From the opening, Ishida's vocals glide through the clouds; they are breezy and exhilarating. It sounds as if Ishida's heart has taken flight and she is letting herself go, giving in to unyielding happiness. Wayne Escoffery's sax is breathlessly jubilant, echoing Ishida's feelings of awe and wonder. Jongkuk Kim 's drums are brisk and mesmerizing while the thumping bass of Shin Sakaino and swirling piano of Victor Gould add to the feeling of spiritual transcendence. On "Peace," Ishida's angelic singing reaches dreamy heights as Gould delivers some of his most lovely piano playing.

Like its title, Day by Day reflects the easygoing nature of everyday living. It is a sweet and immediately likeable effort.

Day by Day; Joy Spring; My Funny Valentine; Darn That Dream; Whisper Not; Peace; Where I Come From; The Petal.