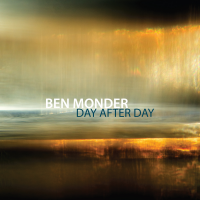 Rare is the musician who remains static throughout their career, and with his professional life dating back to the mid-1990s, Ben Monder has had time enough to change course when the desire strikes. Since his outstanding debut, Flux (Songlines, 1995), he has released a handful of equally impressive albums which follow in its footsteps, as well as infrequent collaborations with vocalist Theo Bleckmann. He was also selected to play guitar on David Bowie's final album. Having wanted for years to perform his own interpretations of other composers' work, Monder finally got his wish with Day After Day, a two-disc collection of fifteen songs.

The first of these discs is a solo selection of seven classics. These include interpretations of a couple vintage Frank Sinatra ballads; the bubbly "Emily," as well as a subdued "My One and Only Love," which loses some of the sappy joy old blue eyes' version had. Monder also plucks his way through Burt Bacharach's "Windows Of The World." Devoid of vocals, his fairly faithful rendition instead remains low key for five minutes before turning in an angsty finale. This first half of Day After Day is presented as a very intimate, if unadventurous performance. Less like sitting around a campfire, as Monder remains plugged in throughout, it's more akin to being alone in the studio with him, his guitar resting on his leg, intent on simply having a good time telling a story.

The second half of Day After Day departs from the subdued intimacy of the first. Monder adds a couple familiar faces in bassist Matt Brewer and drummer Ted Poor, for a further eight covers. These give the two-disc collection a bit of a yin and yang flavor, making for separate but complementary experiences. The title track is an odd aural exploration which bears little resemblance to the 1970s' British rock hit it once was. Covers of songs by The Beatles and Bread are unexpected yet fun, while John Barry's "Goldfinger" gets a rumbling update, making the vintage James Bond theme much heavier without losing any of its cool. Richard Carpenter was one of the most talented pop arrangers of the 1970s.' Here Monder takes his "Only Yesterday" and keeps the light, airy tone but makes it his own, removing the saxophone, oboe, castanets and maracas.

Day After Day stands independently as an enjoyable side note in Ben Monder's growing catalogue. Rather than furthering his music down the path forged by his previous releases, he has instead created something entirely different, which mostly succeeds on its own merits.

Disc One: Dreamsville; Emily; O Sacrum Convivium; My One And Only Love; The Windows Of The World; Never Let Me Go; The Midnight Sun Will Never Set. Disc Two: Galveston; Dust; Long, Long, Long; The Guitar Man; Goldfinger; Only Yesterday; Just Like A Woman, Day After Day.