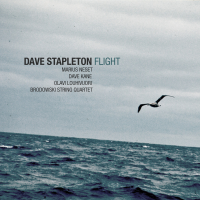 Dave Stapleton is a multi-tasker of Olympian energy and talent. That is not a new observation, but as the pianist and record company director's outputs increase, it bears repeating. As well as operating the Edition label, which has released 30 albums of immaculately-recorded British and European jazz since he founded it in 2008, Stapleton has maintained his own career as a musician. Flight is his seventh album for the label as leader or co-leader, and is his most ambitious outing to date. It employs a jazz quartet and a string quartet—but is a long way from being a routine with-strings album.

As with most of Stapleton's albums, Flight is as much about his composing and arranging as it is about performance. The writing here conjures a serious atmosphere: sometimes wistful, sometimes somber; sometimes seeming to reach back into memory, at others forward towards resolution, or, perhaps, the unattainable—but always reaching. The melodies are strong and sharply turned; the harmonies tonal but flecked with astringency and flashes of dissonance, at times variously suggesting the chamber music of Antonin Dvorak, Benjamin Britten and Dmitri Shostakovich. To this pleasingly complex ambiance, the jazz soloists add another dimension.

The collective personnel is made up of young lions from across Britain, Europe and Scandinavia. Two are Edition artists in their own right: Danish tenor saxophonist Marius Neset and British double bassist Dave Kane have both released debut albums on the label, Neset's Golden Xplosion (2011) and Kane's Eye Of The Duck (2009). Alongside Matthew Bourne and drummer Steven Davis, Kane is also one-third of the Bourne Davis Kane trio, who released Lost Something on Edition in 2008. Neset, the chief soloist on Flight, more than justifies the excitement which greeted Golden Xplosion.

Finnish drummer Olavi Louhivuori is a less familiar name. Stapleton heard him playing with saxophonist Tore Burnborg at Jazzahead in Germany in 2011, got along well with him at a post-performance meal with the band, delved into his back catalogue and liked what he heard. Louhivuori has also performed and/or recorded with trumpeter Tomasz Stanko, bassist Mats Eilertsen and pianist Alexi Toumarila. Violinist David Brodowski, born in Poland and brought up in Germany, formed the Brodowski String Quartet in London in 2005, with three British players. The quartet is an up-and-coming item on the country's chamber music scene.

Jazz/classical mixes are fiendishly difficult to pull off, and few of them are as deeply synthesized as the music on Flight. It is an album whose elegant surface sits atop real depth and substance. Highly recommended.