Tierney Sutton: Dancing in the Dark 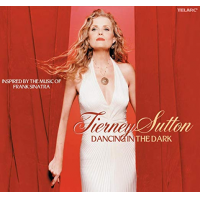 Tierney Sutton's latest Telarc release celebrates the music of Frank Sinatra—not the ring-a-ding-ding, devil-may-care, wise-cracking leader of the Rat Pack who was the epitome of hipness and bravado, but, as Sutton observes in the liner notes, the "dark corners" of Sinatra's work that she finds "endlessly compelling." The mood is hushed, sentimental and pensive as Sutton places her indelible stamp on such heart-wrenching Sinatra classics as "Only the Lonely," "I'll Be Around," "Last Night When We Were Young," and others.

Sutton's voice, soft and smoky, is perfectly suited to the balladic repertoire, and her readings, albeit unlike Sinatra's, as well they should be, are nonetheless apt and persuasive. She is ably supported by pianist Christian Jacob, bassist Trey Henry, and drummer Ray Brinker, with whom she has worked for more than a decade. A string orchestra, conducted by Jacob, has been added on five numbers. I don't know whose idea that was, but it does little to enhance the performance, and I much prefer the seven tracks on which Sutton and the trio are on their own.

Among the latter, Sutton is especially warm and seductive on "Only the Lonely," "I'll Be Around," "I Could Have Told You," and "Last Night When We Were Young." It should be noted that she is no less captivating on a handful of songs whose connection to Sinatra is more tenuous, including "What'll I Do," "I Could Have Told You," "Emily," and the Rachmaninoff-based melody "I Think of You."

The finale, with strings attached, is a well-designed medley of Sammy Cahn/Jimmy van Heusen's "Last Dance" and Howard Dietz/Arthur Schwartz's "Dancing in the Dark," a lovely way to end an impassioned and essentially delightful homage to one of the twentieth century's meistersingers, Frank Sinatra, who was known and admired by his legions of fans simply as "the voice."

What'll I Do; Only the Lonely; I'll Be Around; All the Way; I Think of You; Where or When; Without a Song; I Could Have Told You; Emily; Last Night When We Were Young; Fly Me to the Moon; Last Dance / Dancing in the Dark (55:04).