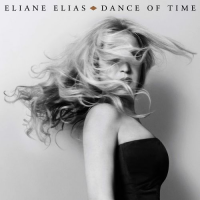 Two years ago, Eliane Elias released Made In Brazil (Concord, 2015) and all it did was win the 2016 Grammy for Best Latin Album. It's a great album and with Dance of Time, Elias hasn't repeated a successful formula; she's perfected it. This is an opulent recording, rich in its authenticity and lavish in its glorious accomplishments.

As Elias has transitioned from a pianist/vocalist to a vocalist/pianist (there is a difference), some fans and certainly some critics have wondered if she has wavered too close into crossing over into pop music. Not to worry. Whether she is singing in English or Portuguese, she remains as far from being a pop singer as a hot dog is from being a T-bone steak.

Elias' voice is a bit delicate and she compensates for her lack of sheer power by choosing material that best compliments her, a trait she shares with Sade, another vocalist who doesn't overwhelm with raw power and substitutes expertise in knowing her limits and wisely choosing material which best suits her. Elias' assured voice breathes new life into standards like "Speak Low" and "You're Getting To Be A Habit With Me" and her assured confidence as a songwriter makes her own original composition, "Little Paradise" seem like something you've heard before even though you haven't.

For nearly an hour Elias, deftly crafts a record that seems like a live performance augmented by a white-hot band of supporting musicians. Dance of Time fills the listener with joy as it soothes one moment on a sexy ballad like "Little Paradise" one moment and irresistibly swaying to "O Pato." Among the guest players Mike Mainieri, a compadre from Steps Ahead and ex-husband, Randy Brecker sit in adding their contributions on vibraphone and flugelhorn respectively. Mark Kibble lends his tenor vocalizations to the affair and stands out on the "Copacabana" (no relation to the cheesy Barry Manilow song, thank you very much) where he harmonizes with Elias's beguiling lead and as she lays out, Kibble brings it home with an euphoric closing.

Special attention should be directed to "Samba De Orly " and "Not To Cry (Pra Nao Chorar)" two collaborations with Brazilian singer/songwriter/guitarist Toquinho who worked with Elias when she was seventeen. "An Up Dawn" is a spirited duet with Elias' piano teacher, Amilton Godby. "I wanted to include musicians who were very important in the start of my career," Elias says. "Dance of Time represents the spectrum of my career from the very beginning until now."

Recorded in Brazil and produced by Steve Rodby and Marc Johnson, the musical and marital partner to Elias, the idea is to pay homage to 100 years of samba music and it more than delivers on that score. As Elias has transitioned from a pianist/vocalist to a vocalist/pianist (yes, there is a difference), some fans and certainly critics have wondered if she has wavered too close into crossing over into Diana Krall territory and leaving the jazz behind in pursuit of reinventing hereself as a sultry chanteuse. That's a suspicion born out in part to how many glamour shots of Elias clad in a slinky black dress seem to be showing up in the CD booklet. Not to worry. Elias remains first and foremost a jazz musician whose piano playing precision is impeccable. Whether she is singing in English or Portuguese, Elias remains as far from being a pop singer as a hot dog is from being prime rib.

There is a certain degree of frustration that comes with Dance of Time and that is despite how good it is it will struggle to find the audience and attention it so richly deserves. The sad truth is one would think---one would hope—scoring a Grammy award win would herald an awakening and a rediscovery of Brazilian jazz in general and Elias in particular. That probably won't happen. Further, the fact that Dance of Time is neither as non- disposable as much of the music on smooth jazz stations is or as staid and safely escondened in the dusty past as some of the programming on contemporary jazz stations, where is this terrific album's natural niche?

The immediate answer is it belongs in the record collection of anyone who loves honest and authentic Brazilian jazz and Dance of Time is as honestly authentic as it gets. Eliane Elias has been one of the genre's most consistently masterful virtuosos and even when she's looking back fondly, she is still moving forward confidently. Needless to say this is top shelf material and highly recommended.