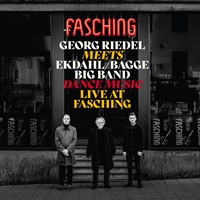 Before arriving at "Dance Music," the hour-long concert opens with Riedel's three-part "Song for Nobody," also suitable for dancing and well-received by the audience at Fasching. Part 3, a lovely ballad, awakens memories of Duke Ellington, thoughts reinforced by Fredrik Lindborg's expressive baritone sax. The picturesque "Dance Music" is next, slowing its buoyant mood and tempo midstream for a muted trumpet solo before returning to the playful starting point. "Ice Crystals" is a chilly Nordic-inspired ballad with piercing tenor solo, "Fugacious Music" a flat-out swinger in the best Basie/Herman tradition with a sharp introductory piano solo by the band's co-leader, Carl Bagge (the other is drummer Per Ekdahl who helps keep the rhythmic temperature high).

"On a Second Thought" dances lightly in like raindrops on a tin roof, with Bagge's piano leading the way through its heavy-hearted theme (polite applause from the audience) before an airy alto sax reminiscent of Paul Desmond lightens the mood on the persistent "Stubbornness." The penultimate number, "Det ar Vackrast Something-or-Other," surely has a significant meaning in Swedish, but that remains unexplained, while the title of the finale, "Fast Music," speaks for itself. "Vackrast" showcases another of the band's admirable soloists, a trumpeter, unnamed (as are the others) but identified (in Swedish) to the audience. Bagge's nimble piano introduces "Fast Music," which encompasses heated solos by an alto sax (perhaps two?) and typically snug and smoking ensemble work.

As Riedel wrote and arranged every number, any assessment must begin there, and the grade is by and large excellent. He was eighty-five when Dance Music was recorded, but no one would know that based on the music presented here, which is as sturdy as it is stylish—the work of a much younger composer, most listeners might assume. Reidel's love for the music surely has a lot to do with that. As for the ensemble, it bears aloft a proud banner for big-band jazz in Sweden, and does so with elegance and assurance. There are no weak links in that chain. This is Dance Music that should quicken the heart as well as the feet.