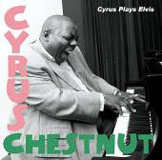 "Elvis isn't dead until we say he's dead! That was the defiant proclamation on a billboard advertising a Bay Area Oldies station. An immediate reaction would be: "Which Elvis are we talking about? Fat Elvis? Thin Elvis? Hollywood Elvis? Vegas Elvis? With Cyrus Plays Elvis, pianist Cyrus Chestnut has added a new category to that list: Jazz Elvis.

The concept isn't all that far-fetched: Presley's early recordings came from the same country-blues space Jerry Lee Lewis and Johnny Cash called home, while gospel was a major factor in Elvis' music right up to the end. Chestnut's extraordinary interpretive powers meld with his affinity for the aforementioned musical genres to take fresh looks at some of Presley's biggest hits.

Lieber and Stoller's "Hound Dog sets the tone, as Chestnut jumps into Boogie Woogie Rave-Up mode right off the bat. The take is faithful to the original recording, as are most of the cuts on the disc—some of them too faithful, which could frustrate jazz purists. Listeners need to be patient, however, because when Chestnut finally breaks away from the melody and begins to improvise, that's when Cyrus Plays Elvis really takes off. His solo on "Hound Dog lifts the piece from a simple instrumental cover and morphs it into a glorious extension of the original's energy.

Chestnut's angles of attack are almost always satisfying: "Love Me Tender appears as a lilting waltz right out of the Vince Guaraldi school; "It's Now or Never blows away the romanticized smog that surrounded the original while retaining some of its Latin feel; and Chestnut deletes the liberal guilt inherent in Mac Davis' "In The Ghetto, choosing to focus on the loss that comes with watching a doomed life reach its logical conclusion. "Don't Be Cruel is slowed down just enough to make it a brush-driven bop blues that features a nice fat solo by bassist Dezron L. Douglas.

Other than that segment and some hot counter-soloing by Neal Smith on a bombastic deconstruction of "Heartbreak Hotel, the spotlight rarely strays from Chestnut, just as it rarely strayed from Elvis when he was onstage. This is no problem, as Chestnut is capable of all the heavy lifting you could want. The two times Chestnut lets another solo voice—reedman Mark Gross—into the mix are the disc's weakest moments: Gross' alto adds nothing to the maudlin "Don't, and his soprano on "Can't Help Falling In Love comes too close to the wretched place Kenny G dragged "What A Wonderful World.

Conversely, the best moment on Cyrus Plays Elvis is the simplest, as Chestnut works alone on "How Great Thou Art. Eschewing the drama of the original, Chestnut's solo piano take is one man proclaiming sincere, private gratitude for all the gifts his Maker has given him. This is 180 degrees different from the over-orchestrated sound that marked Elvis' final years with us, and that's as it should be. As Chestnut points out in the liner notes, he doesn't need to re-create Elvis—we've got impersonators for that.