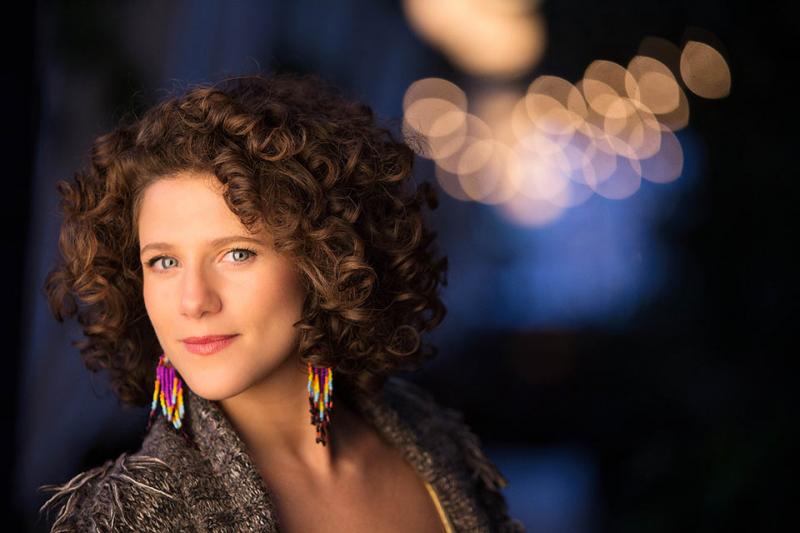 By BELINDA WARE
March 3, 2015
Sign in to view read count
In countries around the world, March is designated as Women's History Month, a time where we acknowledge women of excellence in a variety of fields of expertise. Women who create milestones and trends to awaken the consciousness of people who they inspire with the light of a new approach to something familiar. A true pioneer is one who possesses the independent spirit of ingenuity and the spirit of change. Looking at the world of jazz, that independent spirit is embodied in the raw artistry of one of the industry's new progressive talents, Cyrille Aimee.

It is indeed a good day for jazz vocalist, writer and improviser, Cyrille Aimee. When it comes to her journey thus far as an independent jazz artist, Aimee is a vocalist whose life story reads like a storybook. It was the day that she discovered the music of French guitarist, Django Reinhardt that led her on a destiny laden journey of self discovery in the world of music.

As a vocalist, her motivation to sing stems from her spiritual quest to share peace and love with humanity through the arts. Aimee sees herself as a gypsy world traveler with a humanitarian agenda to unite cultures and people in general through her music. Her versatility in musical expression speaks in her recordings and live shows. Aimee scats, sings and writes music from an internal treasure chest full of melodies, rhythms and sounds that she discovers during moments when she least expects it. In a recent interview with Aimee, she shared that she follows the natural rhythm of nature when it comes to music letting her creative instincts lead the way in lyrical flow as a jazz interpreter.

Her finesse in improvisation began to take shape during her childhood. She grew up in a home where her parents exposed her to the world of music ranging from regional French music to Latin salsa records, including meringue and bachata. She listened to these styles of music throughout the week growing up as a child. The musically charged environment in her upbringing led to her discovery of the recordings of Django Reinhardt whose influences continue to shape her evolutionary style in transformation as a jazz artist. The experience of hearing the music of Reinhardt awakened within Aimee her own "gypsy spirit," a passion for the arts and a desire to identify her own vocal style in musical expression.

Her gifts as a pure jazz vocalist led to the opportunity to travel to the USA leading to a drummer hiring her for first gig in the States singing at the Cupping Room in New York City. This turned into a seven year gig where she soon become known as one of the industry's most progressive talents on the rise as a fierce musical improviser in the artistic environment of SoHo.

As a jazz interpreter, Aimee is a purist and a natural singer who expresses her musicality in the moment in real time. In a recent interview with her, she described improvisation as something she does not control. Sometimes she hears the notes of a melodic run while talking a walk or hanging out with friends. It happens in its own timing. For audiences that attend her shows, it is apparent that it happens quite often when she enters the stage and tunes in to the groove of her musicians as they jam in the pocket live in concert.

When it comes to her relationship and approach to music, Aimee is a free spirit with no boundaries when it comes to writing and interpreting songs. She has a natural flare for mixing various genres and making it work in terms of innovation and synergy. Aimee's recent version of Bob Marley's "Waiting in Vain" is an eclectic mix of vocal harmonic sounds comprised of Aimee singing lead and backup vocals, as well as mimicking the sound of various instruments culminating in a finished product that is a unique artistic work that mirrors the essence of the conceptual genius of the legendary Bobby McFerrin.

Aimee's most recent CD release, It's A Good Day is a musical testament to her persona as an artist who has a basic point of view of living life to the fullest. The project consists of Aimee on vocals along with an ensemble consisting of global musicians consisting of three guitars (Jazz, Gypsy and Brazilian) with bass and drums. It's a Good Day is a testament to her creativity in mixing jazz, African music, zydeco, pop, blues and folk music in an innovative fashion that works brilliantly. This particular project breaks new grounds in redefining jazz with a modern feel and as such stands on its own representing Aimee's musical intellect in relation to world cultures and world music as a whole.

Aimee's soft and breezy vocals on "Twenty-Eight" create a soothing rendition of the track accompanied by acoustic instruments creating an easy listening experience. Aimee sings straight ahead vocals over Afro Latin rhythms on her remix creating a fresh rendition of the R&B hit, "Off the Wall," by Michael Jackson. The mid tempo funk that rides under her vocals create a notable track that is different than the original and at the same time engaging in terms of the musical authenticity that is emoted from Aimee's artistry and approach to the song.

Aimee remakes the classic hit, "Young at Heart," driving the lyrics with a poignant and reflective feel to her tonality. Her bluesy accents on the vocals are honest and organic as she bends certain notes on this song like a true blues crooner creating the ambience of the romance and the heartache of a breakup simultaneously. Aimee is openly personal unveiling the emotion of her life experience, from her joys, pains, and hope culminating in an organic moment that speaks her truth in song. As a concert artist and studio musician, Aimee has a natural ability to sing and reach the heart of her audience going beneath the surface into a real life moment that is defined in the lyrical voyage of a song.

Bass, guitar and voice combine in an acoustic celebration of French music mixed with jazz flavoring in her delightful French lyrical presentation entitled "Nuit Blanche." It's smooth and upbeat as a festive track showing her versatility in mood and style.

One track in particular that stands out as a truly eclectic mix is entitled "One Way Ticket." The influence for this track came from a trip to India. The track begins with acapella vocals by Aimee leading the introduction as she blends in the fusion of the unison tone of an Indian singing bowl that she personally plays. The result is a catchy track that morphs into an up-tempo track later toward the chorus with the full acoustic ensemble coming in to take the track up-tempo with an Afro-Latin groove in tempo leading to a high energy scatting presentation that is reminiscent of the legendary Ella Fitzgerald.

Looking at the project overall, it is qualitative in its artistic integrity and a pioneering modern jazz project. As an artist, Aimee knows her voice and is full of pleasant surprises as is expected from an artist who thrives on improvisation in the moment. She is organic as a live performer and authentic as a musical architect who can approach a simple song from a soulful perspective creating a fresh new version of music that stands on its own. Looking on the full roster of songs on her new release, It's a Good Day, it is prudent to say as an observer that this project is Aimee's triumph as a interpreter of song. Each song selected speaks her point of view on the meaning of life as an artist and as a gypsy traveler infusing her sage and wisdom through the melody in each song making the finished work comparable to a therapeutic, personal conversation between Aimee and the listener; and at the same time, Aimee takes the listener to new regions of the world through various languages, sound, and pure music.

When it comes to writing new music, her inspiration is connected to her love for regional music, cultures in relation to traveling the world. She has a respect and curiosity for raw, pure music, and regional styles which she can't get enough of. As an artist, she has found a formula that works in mixing straight ahead jazz, French music, zydeco, blues, and classical in various degrees depending on the track she is recording, creating a sound that is undeniably her own. The poetic lyrics of "One Way Ticket" are symbolic of a woman falling in love with the beginning of falling in love. The song is also symbolic of Aimee's own journey as a musical artist. She's on her way and simply put is enjoying each moment, embracing the art of expression and the music she discovers along the way.