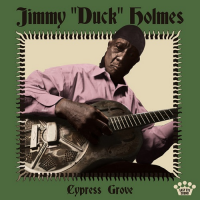 Cypress Grove is the tale of two very different artists following well-tested and successful professional trajectories. While none of the Ur-bluesmen (Charlie Patton, Son House, Tommy Johnson, Skip James, Ishmon Bracey) are living, there remain a few musicians who knew them while they were still alive. One such musician is Jimmy Duck Holmes of Bentonia, Mississippi. One listen to the opening "Hard Times" will reveal the Ur-bluesman Holmes knew as one Nehemiah Curtis "Skip" James (1902 -1969). The flavor of blues played by James and Holmes is known as the Bentonia School, originally created by the unrecorded musician Henry Stuckey, using an unusual D-minor or E-minor tuning, giving their music a deep, resonant tone. Holme's "Hard Times" is based on James's "Hard Time Killing Floor Blues." Holmes's performance is solo acoustic guitar accompanying the voice of Job shaking his tired fist at the almighty. Captured with a slight echo, Holmes's authenticity is magnified—expansive and fecund, his delivery virile but weary.

The second artist in this program is Dan Auerbach, guitarist for the Black Keys and producer and performer on Cypress Grove ( which is released on the Black Keys' label Easy Eye). What Auerbach produces is a 21st century version of Chess Records' London Sessions series or John Lee Hooker's Endless Boogie (ABC, 1971) or Hooker 'n' Heat (Liberty, 1971) where an astute producer with his ear to the ground pairs older blues artists with younger, mostly white performers to revisit the old songbook. Auerbach comes sliding in on the success of the Black Keys, sporting enough momentum to update the old formula in a meaningful and enjoyable way.

After the introductory "Hard Times," Holmes and company get down to business, deliberately building a recording in which power and gravity evolves. The vibe Auerbach achieves is a vintage Excello sound: spare and raw, emotive, deep in the groove. Holmes plays in the single-chord, hypnotic fashion perfected by Hooker in the 1950s. The recording is programmed so that each successive song adds a new musical element. The solo acoustic "Hard Times" gives way to the electric and percussive "Cypress Grove," which, in turn, gives way to a more elaborate arrangement featuring Auerbach's muscular guitar playing on "Catfish Blues." Guitarist Marcus King adds a crying slide guitar to "Rock Me Baby" and "All NIght Long" while Leon Michaels infuses "Little Red Rooster" with an eerie tenor saxophone recalling the narcotic tones of UB40. The performances are fashioned as fragments with abrupt, jagged endings, like fractured thoughts, that recall the earliest blues recordings.

Cypress Grove is an honorable blues statement from Holmes, acknowledging the good intentions of Auerbach. It is enjoyable and educating at the same time: the type of recorded vehicle to bring the blues to a whole new generation.