By Derek Taylor
December 2, 2002
Sign in to view read count 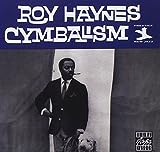 Well into his septuagenarian years, Roy Haynes is still going strong as a leader behind his venerable drum kit. His sticks and brushes have stoked the fires on countless sessions from early work with Lester Young to later stints with likes of Charlie Parker and John Coltrane. Only a handful of living drummers can claim such a lengthy resume of prestigious employers. Back when this recently reissued record was waxed, Haynes was in the midst of an artistically fertile contract with the New Jazz label. He was also fortuitously entrenched at the epicenter of modern jazz, and as such could call on the trio of resourceful and forward thinking sidemen who join him for the date.

Thanks to the ubiquitous Rudy Van Gelder the album features beautiful stereo separation of the instruments, with Strozier’s effusive flute banking melodically off the firm rhythmic resolve of his partners on “Modette.” Ridley moves to the fore for the closing bars of the composition, thrumming out a fast encapsulation of the guiding harmonic current before diffusing into silence. Strozier’s salty alto breezes through the changes of the old warhorse “I’m Getting Sentimental…” setting up a series of breaks by Haynes that measure out sizeable strength with sophisticated subtlety. Strozier’s reentry and subsequent string of choruses follows an analogous path of swinging urbanity up to a fluttering end. The brief, but highly grooving “Go N’ Git It!” spotlights Matthews and the pianist pays his debt to the gospel-inflections of one Horace Silver with some funky rolling comping. Strozier shows some soul by sashaying through the theme and into a solo steeped in hot buttered blues. A lengthy medley winds things up, and the seams between the trio of themes are well stitched. Haynes’ crisp press rolls and cymbal accents are the guideposts alongside Ridley’s rock solid harmonic anchors. Strozier serves up some of his most ebullient playing of the session, particularly on the closing snippet of Sonny Rollins’ classic “Oleo.” Even Ridley has plenty of room to move and makes invigorating use of the space with carefully orchestrated plucks. Haynes rep was well cemented at the time of this session and has only grown in the intervening decades, but it’s a privilege to have access to one of his early dates as a leader just the same.


Fantasy on the web: www.fantasyjazz.com