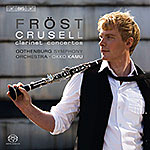 Clarinetists do not have an endless library of texts from which to choose the next project. The best typically cycle through the best of the repertoire (at least from the Eighteenth Century): Mozart, Stamitz (both Carl and Johann), Spore, Krommer, Stadler, Pleylel, and Weber. All eventually stop and take from the creative waters at the shrine of Swedish-Finnish clarinetist and composer Bernhard Henrick Crusell (1775-1838), the most significant Finnish composer before Jean Sibelius. It is proper that Swedish clarinetist Martin Frost has chosen earlier than later to address Crusell.

Frost's earlier Mozart (BIS, 2009) and Weber (BIS, 2009) met with positive reviews. His articulation and technical expertise are without match. His Mozart is so coolly perfect that it raised curiosity as to how Frost would juxtapose Crusell's F minor Concerto's first two movements. In a word: perfectly.

Had Mozart lived long enough, he might have composed a minor key concerto for the clarinet that would have rivaled his Symphony No. 25 in G minor (K. 183) and his Piano Concerto No. 20 in D minor (K. 466). Instead what we have is Crusell, informed by Mozart and reflecting Beethoven, who adds warmth to this chilly key and a bit of sunshine also. Frost recognizes this intention immediately and magnifies the effect with his fine playing.

Crusell's Concertos in B flat major, Op.11 and E flat major, Op.1 are geared more to the virtuoso, allowing Frost to modulate to his heart's content among the fast-slow-fast construct of the concertos. Okko Kamu conducts a crack Göteborgs Symfoniker well-versed in Crusell. The concertos possess a crisp major key spontaneity that can only be sunny and encourage a smile. Frost readily engages these sentiments, drawing as if from some deep creative well whose loam is never ending. His adagios are sumptuous and his up-tempo play is even and never strained. Frost plays with a steady reed of iron, producing a most pastoral of tones.