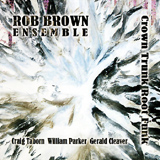 A two decade plus veteran of New York City's Downtown scene, Brown employs three of today's most in-demand sidemen in this quartet. Bandleader, composer and bassist William Parker shares a performing history with Brown dating back twenty years. Drummer Gerald Cleaver has been a regular collaborator of Brown's recently, while pianist Craig Taborn is relatively new to Brown's oeuvre, playing with him for the first time in 2006.

Clocking countless studio hours together, Taborn, Parker and Cleaver are frequent rhythm section companions. Whether locking into the slow burn vamp of "Rocking Horse" or navigating shifting meters on the knotty post-bop of "Clearly Speaking," they demonstrate their affable interplay with fluid invention.

Eclipsing structural traditions, Brown spars with Cleaver on the first half of "Exuberance," discharging pithy, fragmentary spirals as Cleaver throttles his kit with unfettered abandon before the entire group reconvenes.

Despite the album's overall focus on rhythm, Brown reveals a soulful, impressionistic side on "World's Spinning," closing the record with stark, yearning lyricism.

With over a dozen albums to his credit, Crown Trunk Root Funk is one of Brown's most engaging.