By John Sharpe
September 11, 2011
Sign in to view read count 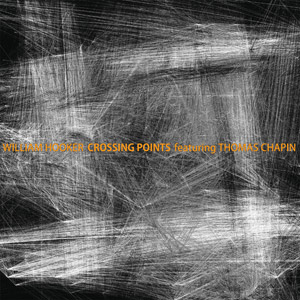 After his well-received Earth's Orbit (No Business Records, 2010), drummer/composer William Hooker raids the archives for Crossing Points, drawn from a 1992 New York City date with saxophonist Thomas Chapin. The drummer has straddled the free jazz and noise camps, but here almost merges the two in a 76-minute program where the energy levels barely move out of the red. Chapin, whose early death from leukemia in 1998, at the age of 40, thwarted a career that sought to gloriously integrate downtown experimentalism into the mainstream, digs deep just to hold on.

Hooker is elemental, a roaring undertow full of controlled power. Once again he demonstrates his facility at sustained long form invention, lending the three improvisations the feel of spontaneous composition. In response the saxophonist alternates repeated motifs extended into yapping over-blowing, with slower melodic passages which take on a majestic grandeur as a result of the contrast.

Appropriately perhaps, "The Subway" initially suggests the white noise of an approaching train, until the sound slowly comes into focus as a saxophone drone and continuous drum roll. It's an uncompromising start, but one that sets the template for this set. They don't come up for air until 15 minutes in, when the pressure eases off slightly and Chapin's soaring alto reaches escape velocity to break clear of Hooker's gravitational pull.

An incremental opening to "Addiction to Sound" evinces more open textures with Hooker rhythmically striking a tambourine accompanied by what resembles a trumpeting elephant, but which the liner notes explain as Chapin blowing onto his reed from underneath. The resultant ritual pulse inspires a slow burning reaction from the reed man as their journey continues. Pitched midway between the two previous cuts in terms of density, "The Underground Dead" includes an astonishing passage of vocalized saxophone invective from Chapin, before an attractive elegiac section for somber alto and Hooker's rolling mallet work.

The Subway; Addiction to Sound; The Underground Dead.