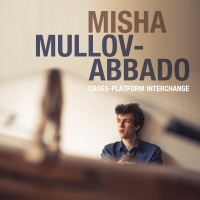 As the son of the Italian classical conductor Claudio Abbado and Russian violinist Viktoria Mullova, music was inevitably in British bassist Misha Mullov-Abbado's blood. After graduating in music and composition from Gonville & Caius College, University of Cambridge he won a scholarship to study double bass at the Royal Academy of Music on its Masters jazz course tutored by virtuosos Jasper Høiby and Michael Janisch amongst others. Cross-Platform Interchange is the follow-up to Mullov- Abbado's 2015 debut album New Ansonia, also on Edition Records.

In this chocolate box selection with thankfully no hard centres, Mullov-Abbado's opening salvo is "Shanti Bell," a blues- inflected double bass outing backed by subtle and unobtrusive percussion. This is followed by "No Strictly Dancing," the main theme of which already seems familiar. Sharing a passing resemblance to "Johnny, I Hardly Knew Ye" aka "When Johnny Comes Marching Home," its vitality and complexity develop in ensemble passages providing ample opportunity for strident trumpet soloing from James Davison.

Following on from the pastoral "Waves" comes the semi-pastiche of "Gromit's Grand Outing." Semi, because there are some seriously deft arrangements amongst the historical/hysterical references. In direct contrast, "Still, Hidden Morning" is an ambient acid jazz outing that imbues positively mesmeric qualities.

The smoky "Pure 100% Nunnery" again delves back into jazz's rich past courtesy of an augmented New Orleans style blues which gradually descends into mayhem before resolving once more into the catchy vamp and a corny ending. The soulful title track which benefits from luxuriant ensemble brass is followed by a lively, Latin-tinged "Hair Of The Bop," opening with a brisk double bass solo from Mullov-Abbado and ensued by a memorable ensemble melody.

Cross-Platform Interchange is a remarkably mature and accessible album, possessing both originality and variety. There's a touch of Mingusian similitude in many of the arrangements and compositions, which actually adds to their overall appeal. To follow in the footsteps of an innovative and legendary bass-playing bandleader and composer is obviously no bad thing but Mullov-Abbado already possesses his own unique musical vocabulary. Expect more surprises and delights from Mullov-Abbado in albums to come.