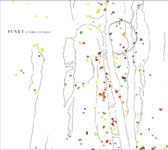 For those who missed Punktfest '06 in Norway, Crime Scenes is the perfect introduction to the Punkt aesthetic. Created by Jan Bang and Erik Honoré, two increasingly well-known artists in pop and improvised music circles, the essence of Punkt is an exploration into the organic dovetailing of modern technology with conventional musical instruments and methodologies.

Its range includes the concept of live sampling, where music being performed is recorded and fed back to the performing musicians, often as loops or in significantly altered form. It makes technology part of the improvisational process. It also includes live remixes, where performances are recorded, then manipulated and represented as part of another performance that may or may not include musicians performing on conventional instruments.

Crime Scenes is largely the work of Bang and Honoré, though there are guest appearances by many artists who were part of the festival, including trumpeters Nils Petter Molvaer and Arve Henriksen, singer Sidsel Endresen, percussionist Audun Kleive and guitarist Eyvind Aarset. The line between real-time performance and programming is blurred, however, as Bang and Honoré blend the contributions of their guests with all manner of processing, loops and previously-sampled sounds. The scant forty minutes of Crime Scenes are broken into thirteen tracks, each with its own rhythmic pulse and sonic ambience; but it's a largely continuous experience that echoes the approach taken in concert performance.

With the sometimes extreme electronic manipulation used by Molvaer and Aarset, it can be difficult to determine who is generating any specific tone or texture. But it's not just processing. As Endresen proved in performance, she is capable of naturally stretching the human voice nearly beyond recognition, while Henriksen's shakuhachi-like tone is as distanced from what most people consider a normal trumpet tone as humanly possible.

While individual tracks are based on grooves that range from almost ambient to vividly propulsive, the overall tone of the disc remains relaxed. And while there's little in the way of conventional song form, there's plenty of lyricism to go along with the compelling rhythms.

Bang and Honoré are masters at sonic conception, so regardless of how much is going on and how experimental things get, the music remains uncluttered and approachable. Their vision of electronica incorporates elements of world music, techno, spoken word and more into a genre-busting mix. By retaining a spirit of spontaneity that distinguishes it from the more simplistic view many have of music stemming from electronic means, they manage to shape Crime Scenes into a truly forward-thinking album.

Purists may balk, but Punkt is one vision of future music that, while awaiting greater recognition in North America, is already becoming a brand name elsewhere in the world.