BY JAKOB BAEKGAARD
January 11, 2014
Sign in to view read count 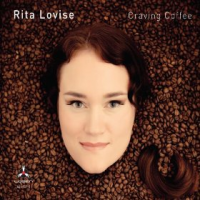 The Swedish poet Tomas Tranströmer once wrote a beautiful poem about coffee called "Espresso." In the poem, Tranströmer noticed the ambiguities about the drink, which looks "like drops of black melancholy captured by the soul" and yet, at the same time, is able to give: "a beneficial kick: Go. Inspiration to open your eyes."

Norwegian singer/songwriter Rita Lovise's album Craving Coffee has the same qualities as Tranströmer's poem. Her music is a brew that is both smooth and strong and filled with flavor. In the notes to the album, Lovise tells how "It took me 17 years of experience to develop the lyrics, a good balance between intricate chord progressions, relatively simple melody lines and to mix it all together and find my own 'signature.'"

The final result is impressive and is enhanced by the stellar sound from the famous Norwegian engineer Jan Erik Kongshaug, who recorded, mixed and mastered the record in his Rainbow Studio in Oslo.

At heart, Rita Lovise is a singer/songwriter, but she has the vocal talents of a jazz singer and a way with words like a poet. She changes effortlessly between a naked recitation like "Solitude," carried only by her smoky voice and guitar, and a full-blown band number like "Pale Indulgence," where saxophonist Henning Gravrok's passionate tone provides a refreshing contrast to the creamy sound that is often found on pop-oriented records.

While Craving Coffee can be used as lovely background music on a Sunday morning, it is also a record that rewards deeper listening. It has layers of complexity and notes that reveal a pleasant aftertaste that isn't sweet or bitter, but a place in between.