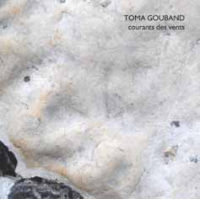 A lithophone is a musical instrument consisting of a rock or pieces of rock which are struck to produce musical notes, either in combination, producing harmony, or in succession, producing melodies. In May, 2011, French percussionist Toma Gouband visited London to play at the annual Freedom of the City festival, solo and in an Evan Parker octet including Matt Wright and Lawrence Casserley on electronics. Gouband played a lithophone and other assorted means of percussion, including a bunch of tree branches in leaf; his distinctive instruments and playing of them left a long-lasting impression on all who witnessed his performances.

On May 3, the day after the festival, he was recorded solo, playing lithophone and percussion, in Parker's favorite recording location, St Peter's, Whitstable. Gouband played one continuous piece, lasting just over three quarters of an hour. As always, the natural resonances of the church created a full, rich sound that is perfectly captured by the recording. Those resonances are an essential part of the performance, enhancing Gouband's playing so that this is actually a duo between the man and the building. Initially, he spaces out his sounds, letting them resound, no doubt getting used to the building as a playing partner. Once he has the measure of the space, his playing becomes quicker, although he remains very aware of the resonances, leaving appropriate gaps for them to be appreciated before pressing on.

Gouband is a master of the lithophone, using the range of tones from the struck rocks, plus other percussive sounds, to create a rich piece that never opts for straightforward rhythms but instead features complex polyrhythms that are very gentle on the ear. At times, the sounds of the piece could easily be mistaken for a field recording of a natural phenomenon such as water dripping in an underground cavern or of a human activity such as miners at work.

As music, it can either be given full attention or it can "just be there." In the former case, the more attention it is afforded, the more it reveals greater details and complexities; in the latter, it provides a relaxing, meditative atmosphere. Either way, it is hugely successful.