By DAN BILAWSKY
November 11, 2011
Sign in to view read count 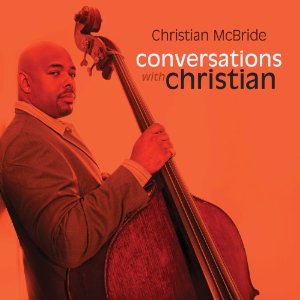 Plenty of ink has been spilled by those espousing their opinions on the art of the trio, but the duo format doesn't get its due nearly as often—either in print or on record. The trio format allows for various permutations in musical interaction, but pairing two artists together is all about direct, head-to-head conversation, and bassist Christian McBride knows a thing or two about this. While McBride has made a name for himself as a go-to bassist for all occasions and styles of music, his podcasts, Sirius-XM Radio Show (The Lowdown: Conversations With Christian McBride) and work as the co-director of The National Jazz Museum in Harlem have also shown the bassist to be an engaging presence in one-on-one games of the aural variety.

While McBride considered the idea of a duo record in the late '90s, he had other things on his mind at the time. Now, more than a decade later, he brings this concept to fruition with some help from thirteen A-list partners. Violinist Regina Carter joins the bassist for a baroque-meets-the-blues exploration of Johann Sebastian Bach's Double Violin Concerto ("Fat Bach And Greens"), vocal-pop icon Sting makes an appearance with guitar-in-hand on "Consider Me Gone," McBride and vocalist Dee Dee Bridgewater engage in saucy repartee on the funky and engaging "It's Your Thing," while shtick comes into the picture on a bluesy Jew's harp and vocals-meet-bass number with actress Gina Gershon ("Chitlins And Gefiltefish").

While McBride is more than comfortable and compelling in every setting on this album, the piano and bass partnerships on display seem to rise above the rest of the performances. Eddie Palmieri brings high energy Latin jazz into the mix on "Guajeo Y Tumbao," the dearly departed Dr. Billy Taylor brings a sense of calm and peace to the album with his own "Spiritual," which opens and closes with some gorgeous arco work from McBride, and George Duke delivers the most chops-heavy piano work on the record, with "McDukey Blues." While the late Hank Jones' isn't nearly as aggressive as Palmieri or Duke, his connection with McBride may be more powerful and palpable, and this pair deserves to be dubbed The Great Jazz Duo for this performance.

Preconceived notions concerning structure seem to surround most of these numbers, but McBride's duet with pianist Chick Corea is of the organically-developed variety. Suspense-filled sounds and Spaniard-Argentine influences abound as "Tango Improvisation #1" takes shape, but a blues foundation sneaks into the music as the piece develops, and the final act surrounds choppy, paranoid single-note statements from Corea's piano.

Conversations With Christian McBride may, ultimately, be critically eclipsed by the bassist's fine big band record, The Good Feeling (Mack Avenue, 2011), that arrived a mere two months before this collection, but that would be a shame. These albums are actually companion pieces that highlight McBride's mastery of all things musical.