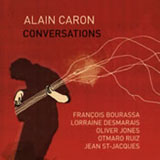 Canadian bassist Alain Caron is best-known as the former member of collaborative 1980s fusion group UZEB and his own projects as a leader since that time, including the house beats-meets-ambient electronica-meets-contemporary fusion of 5 (BHM, 2005) and the concert DVD Alain Caron Live: Cabaret de Montréal (Norac, 2006). Still, digging into his past it becomes clear that Caron's reach has always been broader. As capable with acoustic bass as he is the fretless electric variety, Caron spent considerable time in his early years working in mainstream contexts, making Conversations a completely logical addition to his discography.

The intimacy and conversational nature of the acoustic duet is the foundation for Caron's disc, which teams him with other Canadian artists with whom he's intersected over the years including pianists Lorraine Desmarais, François Bourassa and Oliver Jones, as well as vibraphonist and one-time UZEB member Jean St-Jacques. Caron also welcomes Venezuelan-born pianist Otmaro Ruiz, with whom he collaborated on another fusioner's all-acoustic tangent, guitarist Frank Gambale's Natural High (Wombat, 2006).

The dozen tracks—all but two composed by Caron—range from the elegant swing of Charlie Parker's "Confirmation, with St-Jacques proving he's as widely versed and bebop-capable as Caron, to "Scrapper, a more fiery original from Caron that, paired with Canadian icon Oliver Jones, is the perfect follow-up to Parker's often-covered classic.

Elsewhere, Caron's predilection for the lyrical is heard on the melancholic "Ivoire, where his acoustic bass guitar fronts the theme before handing it off to Ruiz. There's no lack of virtuosity from everyone involved but here, as on the Latin-esque "Questions, featuring Bourassa, it's about the music and the essence of melody. Still, there's complexity to be found on songs like the 5/4 theme of "Blue Screen, another feature for Bourassa that's ultimately an up-tempo blues, and the idiosyncratic intro to "X Tensions that ultimately turns into a gentler dialogue between Caron and Desmarais.

Despite the undeniably strong playing throughout, just as important here are Caron's writing, which manages to feel both familiar and fresh at the same time, and the deep level of interaction and simpatico he shares with every one of his guests. There are no highlights to be found because to identify any would be to diminish everything else. Conversations is a consistently captivating listen from start to finish, and an album that deserves to place all the artists involved on the radar of listeners outside of Canada, but especially Caron who, while enjoying some international acclaim (especially in Europe), clearly deserves to be a better-known name south of the border—and not just to fans of high energy fusion.