By Jerome Wilson
September 15, 2019
Sign in to view read count 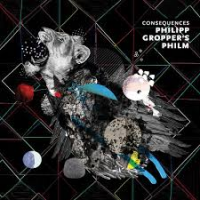 According to the press release for this CD, saxophonist and bandleader Philipp Gropper's concerns in this music are the place of the individual in society and the responsibilities Western societies bear in their dealings with the rest of the world. It's not easy to discern all that from listening to the disc but what you can easily hear is a grinding amalgam of free jazz, electronics and hip hop that touches on the worlds of Sun Ra, Peter Brötzmann, Flying Lotus and Brian Eno among others.

At first listen the dominant sound is a pounding aggression that arises from the crashing and bellowing of Gropper and keyboard player Elias Stemeseder. However the key musician here is drummer Oliver Steidle who underpins the harsh chaos of this music with a logic and rhythm that gives it recognizable form. On "32 Cents" his crashing, irregular beats provide a sense of humanity beneath thudding group stomps, trickling piano and synthesizer lines and sour tenor fragments. On the two-part "Consequences," the slow thrash of Steidle and bassist Robert Landfermann provide forward motion as Gropper and Stemeseder bang away statically on single notes as electronic beeping also seeps into the sonic texture.

"Saturn" is the piece with the heaviest hip hop feel. A steady, off-center drum pattern is surrounded by eerie keyboard drones, simmering bass and warbling tenor, all blending for a placid, cooled-out vibe. Meanwhile "Forgiving" starts out as a genuine ballad with wandering acoustic piano and wispy high tenor notes but gradually congeals into a tighter sound as Steidle increases the tempo and the music becomes more focused and urgent. "Thinking for The Future" is the wildest track of all. Waves of synthesizer wrap around Steidle's bashing while tenor and piano create a wobbly whirlpool that eventually quiets down into a push-pull funk rhythm led by Gropper and Stemeseder. The bass and drums boisterously stomp as a wave of stuttering sax and electronics slices through and the quartet blows freely and chaotically to the end.

Mixing free jazz, electronic distortion, ambient sounds, and hip hop rhythm, this music is a bracing clash of styles. It can be intimidatingly aggressive, but it has enough familiar rhythms, particularly in the drumming, to give you a way in.