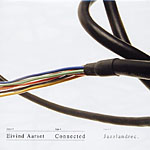 Some instrumentalists are concerned with the technical nature of their instrument, absorbing harmony, scales, chord relationships and other methods to shape their desired goal. Others become enamoured with the sonic possibilities of the instrument, investigating the colours and textures that can be created. For Norwegian guitarist Eivind Aarset it is all important. His chops-less approach to playing and clear interest in the guitar as orchestra would imply that technique is less important; but the unique language that he has developed over the course of his previous two efforts, Electronique Noire and Light Extracts , would imply a more formidable technique at play that is simply so subtle that it is subsumed in the sheer musicality of the work. And that's exactly how it should be.

On Connected , Aarset continues his exploration of somewhat indirect melodicism and thick groove, all within a personal ambience that manages to capture some of the icy cool of the Norwegian landscape. "Changing Waltz" could be a travelogue, with Aarset's almost unrecognizable guitar sounds bringing to mind the whale songs that might be heard travelling through the fjords. The minimalist "Family Pictures 1" and "Family Pictures 2" may offer a more personal view, but they still evoke strong images of broad vistas.

And the nature-educing quality of Aarset's music is all the more remarkable, given its electronics-laden characteristic. Somehow, even with all the samples, programming and assorted odd noises, there is an underlying organic feel that differentiates Aarset from so much of the electronica coming out of Norway. Aarset rarely uses a guitar tone that could be called pure, but within his own timbral vision he seems to create an orchestrated sound that feels completely natural and unconsidered, even though it is clear that a lot of effort has gone into developing the sound.

Aarset's music has nothing to do with meaningless displays of virtuosic technique; rather, it is about building worlds. And while he is the main arbiter of his vision, he is not averse to bringing in other instrumental textures to broaden its scope. Hans Ulrik contributes plaintive reeds on "Feverish," while Dhafer Youssef contributes oud and a vocal chant on the east-meets-north "Nagabo Tomora." Groove is paramount throughout, whether it is the folk-like amble of "Silk Worm" or the more overtly techno rhythm of "Connectic."

Aarset should be considered more of a sound sculptor. What is improvised and what is structured is rarely clear but, in the final analysis, it's an unimportant distinction. What is important is how, with Connected as on his two previous releases, Aarset utilizes contemporary sonic tools to create a world all his own, with a distinctive imagination and unerring visual sensibility.