Home » Jazz Articles » Ultralyd: Conditions for a Piece of Music 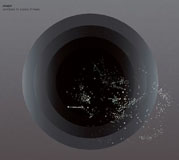 Cross-pollination is one of the things that keeps music moving forward, as artists from different groups come together in new permutations that have clear reference points from where they came, but also create something new and distinctive. Guitarist Anders Hana and percussionist Morten J. Olsen make up the Norwegian noise improv duo MoHa!, whose Norwegianism (Rune Grammofon, 2007) makes a strong argument that not all noise improv sounds alike. While some of the textures they explore in MoHa! are brought to Conditions for a Piece of Music, Ultralyd—Hana and Olsen's collaboration with saxophonist Kjetil Møster and bassist Kjetil D. Brandsdal—is another beast entirely.

While the members of Ultralyd find ways to expand the sonic possibilities of their instruments, and there's plenty of processing going on, there's also a strong compositional component at play. Rock rhythms figure strongly on pieces like "Saprochord, a largely percussion-centric piece that adds tympani and tuned percussion to Olsen's unshakable beat, but Ultralyd's approach to structure has little to do with conventional song form. There are no changes to speak of, and vivid melodies only emerge occasionally. Still, there's a pattern to the darkly ethereal "Pentassonance II, with Hana's acerbic but spare guitar acting as a subtle foundation for Olsen and Brandsdal textural percussion and bass, and Møster's barely recognizable saxophone.

Ultralyd mix abstraction with a firmer pulse on the brief "Comphonie III, where an ambient cloud hovers above a mid-tempo drum beat from Olsen that combines with Møster's more visceral baritone. By contrast, "Low Waist revolves around an aggressively textured bass loop, more energetic drums and, again, a swarm of textures that rise above the pulse, creating the kind of sonic paradox that defines much of the disc.

Still, there are aspects to Conditions for a Piece of Music that, at least, feel like free improvisation but are more considered. "Débitage owes much to the on-the-surface-shapeless electronic music of the mid-to-late 20th century. The title track—the longest piece on the disc and the only one not composed collectively—is a seemingly contradictory exploration written by Olsen that, in its near vaporous ambience, manages to be surprisingly beautiful despite its oftentimes sharper edges.

Ultralyd—like Moha!—isn't for the faint-at-heart. Still, with more defined rhythms and melodic fragments, and a sonic approach that sometimes approaches—if not quite reaching—a curious kind of appeal, Conditions for a Piece of Music makes for a more accessible approach to experimental music.