By Jim Santella
August 7, 2006
Sign in to view read count 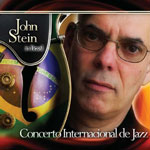 For this intriguing Brazilian project, guitarist John Stein traveled to São Paulo, where he found ambience and collaborated with a cohesive group of like-minded artists. Together, they interpret standards and originals with intuitive feeling.

Stein, who prefers to keep the session to a basic guitar/bass/drums trio with rotating guests, fills each piece with sensual guitar melodies that flow seamlessly like a Brazilian summer breeze. He explores each melodic reference passionately but gently, pulling substance from the air and cementing it as if his lyrical building blocks were made from palm fronds.

Born and raised in Kansas City, Stein moved to Boston in 1980 to study at the Berklee College of Music. After graduation, he taught at the school, introducing students to the elements of music theory, arranging, ensembles, ear training and composition. He still enjoys the school's environment and its never-ending stream of interested students.

Stein's debut album from almost a decade ago, Hustle Up!, was a straight-ahead affair that centered on his quartet. A lot of time has passed since then, and he has explored a wide array of musical topics. He's been quite busy; each recording reveals a different aspect of his love for the music. Eventually, it all leads back to the center groove, though, as Stein reveals clearly on Concerto Internacional de Jazz, a mixture of soulful blues, exotic bossa nova, New Orleans shuffle, and jazz standards. The ensemble's textures, while focusing on guitar, piano, bass and drums, present a few welcome surprises.

Stein has created a lovely give-and-take exchange between two cultural entities; his program melds themes from different regions. The common element? A gentle persuasion that drives the ensemble's lyrical paintbrush along serene landscapes.