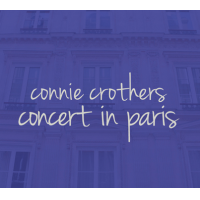 Connie Crothers' piano sounds like nothing you've heard before. Sure, it's acoustic, she plays melodies, she can be inside or outside the music. One thing she isn't, though, is wishy-washy. One of her latest, Concert In Paris, is a solo effort. And for anyone who loves the intimacy of a solo-piano recital, this one more jazz than classical in nature; for anyone who digs the feeling of being played to and for in a cozy setting; for anyone who likes to step back and let the beautiful sounds of an acoustic piano mesmerize you with extended personal musical statements; then Concert In Paris, recorded at the Z'Avant-Garde Performance Space in October of 2011, just might be for you.

Made up of five pieces, ranging in length from nine and a half minutes to just over 14 and a half, one can hear a kind of cavalcade of streams or influences as Crothers moves across the keys, intensely, serenely, quietly, boisterously. There are chordal chunks to chew on, as with the opening selection, "Deuxieme Naissance," where she finds nooks and crannies to expand outward from those chunks toward sweet, melodic passages full of wonder only to stop and gently move into another passage, this one even more mysterious with "Dans Mes Reves," Crothers' single lines now taking center stage, almost as if she were a child with fingers that are just learning to explore the black and white keys before her. No sooner do we follow her down this path than a flurry of slightly disturbed clusters intervene, only to be followed by more single notes, the childlike nature of the music a kind of seesaw between the wayward and the driven. This isn't playground music, but you can imagine "Dans Mes Reves" as a kind of soundtrack to the uninhibited yet playful and almost innocent games created there. Then there's a string of notes and chords that play with melody, anchored ever so slightly by a running left- hand bass line, light to the touch but ever so sure followed by more single lines that suggest a relaxed ride on that nearby merry-go-round.

It's that combination of swiveling chords and unexpected right-hand lines that keeps juxtaposing everything here, tonality and atonality in a kind of fran dance that suggests menace and an overpowering that, truth be told, leads once again to a quiet settling where everything and nothing happens all at once.

Crothers, whose credits include a deep immersion into the works of others (starting with jazz piano pioneer Lennie Tristano) as well as hefty number of collaborations, has that rare capacity to embrace the jazz piano tradition both from within and without. Her playing is strongest when she feeds that flame of unpredictability, where traces of a song like "Come Rain Or Come Shine" or "How Deep Is The Ocean" (present here towards program's end), albeit somewhat embedded and obscured, might surface in a setting that also includes something resembling a Cecil Taylor cavalcade of dissonance and freneticism. But not for long. I don't believe her intent is to keep the listener off- balance so much as to simply explore the piano's potentials in her hands and heart. "Espoir"'s wayward delicacies that close Concert In Paris should be all the proof one needs of that.

Listening to Crothers is an invitation to forget your troubles, your woes, hear the blues one more time, to imagine and to discover, her material not given to pat resolutions but also not laced with iconoclastic puffery. And so, the thick, gentle and richly chromatic chords that open "Homage And Communards" become a passageway into other realms. This is a veteran whose playing is imbued with stories that come through each of these five pieces; a veteran of the jazz wars that women artists have been engaged in now for almost a hundred years. The haunting refrains that "Homage" lingers on are full of holes to fall into, her music here a kind of narrative to Alice's never-ending tumble.

Think of Connie Crothers' playing, especially a solo outing like Concert In Paris, as an excuse to drop everything and just go ... . Dream music for the adventurous, but also for the weary, the faint of heart, the casual lover of all things musical.