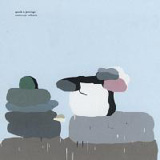 Commuter Anthems is the sophomore follow up to Floyel Files (NCM East, 2005), the debut recording of the duo of Norwegian-born bassist Eivind Opsvik and guitarist Aaron Jennings, originally hailing from Tulsa, Oklahoma. While their previous effort was promising enough, it sometimes drifted a little too close to becoming pleasant aural wallpaper. This release shows remarkable growth and compositional maturity, demonstrating intricate writing, recording and arranging skills.

Relying less on virtuosic jazz improvisation than composing creative instrumental music with pop smarts, Opsvik and Jennings embark on a cinematic journey that is equal parts experimental folk, cutting-edge electronica and dreamy Americana. Using studio manipulation and overdubbing, the pair dabbles in a vast array of instruments and approaches, lending an orchestral sheen to the session.

With a rich combination of available textures, the duo uses acoustic guitars, banjo and upright bass with pared-down trap kits and clattering percussion for the structural basis of many of the tunes. Augmenting the core song forms with squirrelly electronic textures, atmospheric drones, shimmering vibes and mellifluous brass, they reveal melodies every bit as catchy as those penned by indie rock heavy weights like Tortoise and the Sea & Cake.

Inspired by their contemporaries, the title track sounds like an outtake from a vintage Gastr Del Sol record. The buoyant lead melody is driven by a soaring theremin as a rousing horn section ascends over percolating layers of sound and a ramshackle, rubato rhythm section. The Chicago influence continues on "Port Authority," a bright, bouncy number driven by acoustic guitar, soothing wordless vocals, glitchy software hiccups and a driving bossa-nova beat; recalling Sam Prekop at his most experimental.

Exploring the middle ground between the experimental and the accessible, Opsvik and Jennings embody a Brooklyn-based sensibility that gives Chicago based post-rockers a run for their money.