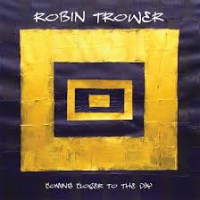 Upon departing Procol Harum in the early Seventies, guitarist Robin Trower embarked upon a solo career in which he has proved himself both prolific and consistent (like the imagistic cover art of the albums). Completely absorbing by its finish, Coming Closer to the Day reaffirms those virtues and belies the intimations of mortality in its title.

The blues-drenched, semi-psychedelic guitar tones on the opening "Diving Bell" certainly augur well for the twenty-third studio entry in the Trower discography. As does the gruff sound of Trower's own vocals on "Truth or Lies." Yet, in light of the fact the guitar icon played all the instruments here except drums (those by regular road warrior Chris Taggart), neither this perfectly serviceable singing nor the fluidity of the musicianship is anything to take for granted.

And while the material itself, like "Coming Closer to the Day," is just once removed from the genre roots on which Trower has based much of his style for close to a half-century (even more, arguably, than his self-avowed influence from Jimi Hendrix), it likewise reinforces the arresting simplicity of Trower's approach. It may only stand to reason that some of these originals, specifically "Little Girl Blue," too closely resemble earlier tunes of Trower's, but such selections, as with the patently-autobiographical paean to touring, "Lonesome Road," are more evidence of style than a lack of new ideas. The bittersweet flavor of Trower's patiently-picked solo there corresponds to the pointed delivery in his voice, fully indicative of the author's personal investment in his original material.

Meanwhile, the ever-so-slightly modified twelve-bar, "Ghosts" is catharsis pure and simple, its raw emotional undercurrent enhanced through the spacious quality of this recording by engineer Sam Winfield, (subsequently mastered by Livingstone Brown who's played bass for the British guitar hero in the past). Yet, as enveloping as that track is, Robin Trower doesn't belabor his point there. Or during "Don't Ever Change" which, like all twelve tracks here, fits within an average playing time of three to five minutes.

As familiar as all this sounds, there's no sense whatsoever that Robin Trower is bored with what he's doing. Quite the contrary, Coming Closer to the Day sounds as purposeful and to-the-point as the albums like Bridge of Sighs (Chrysalis, 1974) by which this man has made such an enduring name for himself.

Diving Bell; Truth or Lies; Coming Closer to the Day; Ghosts; Tide of Confusion; The Perfect Wrong; Little Girl Blue; Someone of Great Renown; Lonesome Road; Tell Me; Don't Ever Change; Take Me with You.