Steve Smith and Vital Information: Come On In 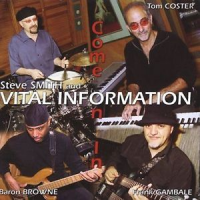 The benefit of a long-standing musical relationship is impossible to quantify, but needless to say there is a certain comfort level, a certain simpatico that results from playing together for the long term. Drummer Steve Smith's current incarnation of Vital Information, featuring guitarist Frank Gambale, keyboardist Tom Coster and bassist Baron Browne, has been together for over six years now, and a certain bravado and nervous energy more evident in their early live release, Live Around the World , was replaced by a deeper maturity on their last recording, '02's Show 'Em Where You Live . Now with their latest release, Come On In , the story continues, with an album that is arguably their most relaxed effort yet.

That's not to say there isn't plenty of energy on Come On In , but the band is clearly moving towards the jazz side of the fusion equation. Gambale's "A Little Something" swings along with Smith contributing some fine brushwork. And with the exception of the set closer, the high-octane Coster/Gambale collaboration "High Wire," Gambale's tone is clean and warm, resembling Pat Martino more than Allan Holdsworth, especially on tracks like the opening "Time Tunnel" and "Cat Walk," which harkens a bit back to Martino's days with his Joyous Lake band.

But while the band is leaning towards cleaner, crisper behaviour, there are plenty of chops to keep fusion fans happy. "Around the World," which tosses in a bar of 6/4 after three bars of 4/4 in order to keep things just the slightest bit unbalanced, is a New Orleans-flavoured funk tune where Browne and Smith demonstrate their unfailing ability to establish and build groove. Coster, as always the consummate accompanist, delivers a greasy organ solo that leads into a trade-off with Gambale where, each time around, they up the ante, building the excitement in what must surely be a high point of their live performances.

And while Smith's name is at the front of the Vital Information imprint, this is clearly a cooperative band where not only does everyone get the opportunity to contribute compositions, but more and more of the writing comes from collaborative efforts. In fact, only four of the eleven compositions are single composer pieces. From tunes that are unquestionably improvisations based around a simple premise, like "Beneath the Surface" and "Fine Line," which find Smith on udu, Coster on accordion and Gambale on acoustic guitar, to more arranged collective tunes like "Baton Rouge," which blends an African highlife acoustic guitar with Louisiana accordion theme, the group asserts a personality that, regardless of style, is clear and recognizable.

Come On In demonstrates the maturity that develops from a group of seasoned players who have been playing long enough to no longer have anything to prove. As much as the formidable skills of each musician are clear, Vital Information is becoming less and less about pure chops and more and more about establishing an identity.

Visit Vital Information on the web.

Time Tunnel; Come On In; Beneath the Surface; Cat Walk; Around the World; Soho; A LIttle Something; From Naples to Heaven; Baton Rouge; Fine Line; High Wire