By Friedrich Kunzmann
October 9, 2019
Sign in to view read count 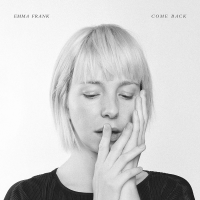 It takes most artists many years and several tries (accompanied by one mishap or another) to turn the search for momentum within a composition into something elegant in which the understated beauty manifests itself naturally, as if it had always been there. New York-based singer-songwriter Emma Frank already reached that point on her third effort, last year's Ocean Av (Justin Time Records 2018). Drenched in a light RnB touch which saw her whispy falsetto accompanied by melodic piano motifs, the album demonstrated song writing that seamlessly combines little detailed rhythmic intricacies with pop-friendly choruses and jazzy chord progressions—never too complex to distract from the song's essence, but not nearly simple enough to bore. Frank's newest outing sees her building upon this groundwork. More stripped-back by nature, and even more meticulously arranged than its predecessor, Come Back finds Frank at the peak of her songwriting, wrapping her compositions, and thereby the listener, in wistful nostalgia.

The folk element, which was already present on her last album, is now prevalent and significantly expressed by the inclusion of Wilco's "Either Way." In the intimate setting of just voice and keys, Frank imploringly tries hard to convince herself of Jeff Tweedy's words: "everything has its plan, either way...."

The arrangement cautiously alternates in volume throughout the record. Hymns such as "I Thought" and "Two Hours" are treated to carefully increasing layers of instrumentation, with minimal string arrangements rounding off the edges. The songs unfold like calm streams, and are reminiscent of trip-hop's heyday in the 90s, as represented by the likes of Massive Attack, Portishead or Morcheeba.

Frank's voice and the songs' intrinsic nature are always in the forefront. However, her backing band shines even in the quietest moments, accompanying the singer with much restraint and empathy. "Lilac"—another highlight on an album filled with nothing but—is another duet performed between Frank's voice and Aaron Parks on piano. Originally an instrumental written by Parks and released on his last record Little Big (Ropeadope Records, 2018), Frank wrote up fitting lyrics to accompany an already melancholic exhibition of chords and melodies that say much by doing little.

Come Back borrows as much from folk and RnB as it does from jazz but, most of all, demonstrates a singer and composer who is able to cut back on all of the redundancies and reduce things to their essence. One is bound to come back to this album in the near future.

I Thought; Either Way; Two Hours; Sometimes; Promises; Dream Team; See You; Lilac; Before You Go Away.