BY MIKE PERCIACCANTE
June 7, 2002
Sign in to view read count 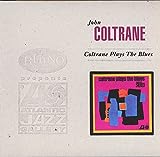 These recordings come from the same sessions that produced 1961's My Favorite Things. This is one of the least well know Coltrane albums, partly because it is an all blues format and partly because it was released at the end of his association with Atlantic records.

Plays The Blues features the talents of McCoy Tyner, Elvin Jones and Steve Davis. It is the beginning of his work with Tyner and Jones in quartet form. For that alone this recording would be important.

Although this album is called Plays The Blues, this is by no means the only blues which Coltrane plays. There are blues elements, moods and feelings in all of his best-known recordings. Listen to "Slowtrane," "Blue Train," "Bessie's Blues" among others and one can't help but hear the blues vibe.

The original six tracks are fantastic and have that same blues vibe. They hit the listener right in the heart and soul and don't let go. All six are superb, but "Blues To Bechet," "Mr. Day," "Mr. Knight" and "Blues To Elvin" are absolute classics.

Rhino has done another fine job in remastering the music and creating a beautiful CD jacket, which incorporates the original album artwork and liner notes. As usual the booklet has additional liner notes by Neil Tesser, author of The Playboy Guide To Jazz as well as the original liner notes as written by Joe Golding.

Long-time Coltrane fans will fall in love with the clean, crisp sound. New fans will be afforded a great opportunity to be introduced to the master's work on this timeless album. Another four-star re-issue from the best re-issue label — Rhino.