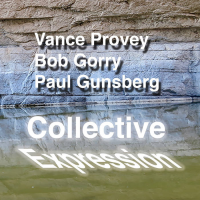 It would seem appropriate that these Connecticut natives would strut their free-form stuff at the prominent Firehouse 12 studio and venue. Hence, the album moniker seeds the basis for the outing, where Vance Provey switch-hits between trumpet and drums while Paul Gunsberg does the same, performing on drums and saxophone. Ultimately, the trio's in-your-face posture tells the tale via a zillion contrapuntal and contrasting maneuvers, largely etched with razor-sharp or tangled dialogues.

The trio dishes out a boisterous soundscape paced by irregular pulses while switching roles on a nanosecond's notice. Toss in the customary call and response mechanisms and some subdued horn parts, escalated by bare-knuckled spontaneity, and you have a hard-edged recipe for the entire process spanning eight tracks. Yet the lack of a bassist sparks a sense of weightlessness at times, which is an aspect that has pros and cons because these fiery incantations could use a bottom-end presence to help anchor the variable currents.

There's no shortage of energetic output as the musicians strip it all down to basics and let the chips fall where they may. Now, this surely sounds like it would have been nice to see at a venue, but from a holistic perspective the similarities between the tones, counteractions and lack of palpable themes generate a bit of listening fatigue towards the midsection. Unless you are counting notes and deeply analyzing the band's tactical output, it may fare better to play half the album and revisit the remaining tracks during a subsequent sitting. Then again, this could be a positive attribute for many improvisational advocates or followers.