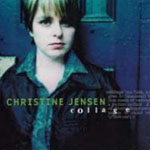 Christine Jensen starts Collage with a blues in fancy wrapping: a funky Rhodes ostinato, a displaced, sliding tonal center, and a stutter-step orchestration. This rich writing asks and gets the most from Jensen's musicians on this, her debut recording.

Drummer Karl Jannuska and pianist Brad Turner chat it up throughout the album. Their open phrasing on "Sweet Adelphi" and "Half Tide" lets the soloists breathe—lets them say something, then rest. Turner leads while Jannuska adds sweeteners and asides: an extra tom roll or a passing change of feel, a shift of emphasis from the front to the back of the beat.

Jensen's big sister Ingrid emerges as the group's most potent soloist and, along with Jannuska, its most mature voice. She slips sideways through the familiar harmony of "Summer Night" and floats over the time on "Afternoon Off," choosy about hooking into the rhythm section's pulse, always in control of her horn.

Christine Jensen's solo voice gets somewhat buried until "Half Tide," when her luminescent soprano draws the band into a serene wander. But she makes Collage work by rewriting the old forms, crowding some spaces and opening others. With the melody of "Sylvan Vale" rolling down over its climbing harmony, or the fat wrong note she wedges into "Camel Trot's" shout chorus, or any of a hundred voicings or rhythms, Jensen's writing makes for good friction, that rub jazz players live for.