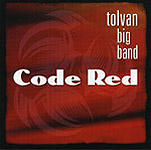 Sweden must have more jazz big bands per head of population than any other country in the world. Tolvan Big Band, based in the southern port city of Malmö, is the cream of the crop. Tolvan means The Twelve, the number of musicians in the band when it was formed in the late 1960s. It also refers to the 12 centiliters of aquavit each of them would routinely consume on a gig! Arrangements were pretty loose in those days. When saxophonist Helge Albin, an admirer of serious moderns like Thad Jones and Bob Brookmeyer, took over the leadership in the 1980s, he tightened things up, turning Tolvan into the 18-piece powerhouse unit it is today and began winning the band an international reputation.

Tolvan has played with Dizzy Gillespie, David Liebman and Michael Brecker, and even performed tunes from Rossini operas on a tour with English composer/arranger/pianist Mike Westbrook. It has appeared at Switzerland's prestigious Montreux Jazz Festival and toured the UK, Australia and South America. In 1995 Albin was awarded the daily newspaper Sydsvenska Dagbladet's Europa Prize, normally awarded to politicians and scholars, for turning the band into "a European institution of significance .

Albin's jazz influences are small groups, such as those of Miles Davis and Herbie Hancock, but when it comes to writing he cites classical composers Bartok and Stravinsky. It produces an interesting mix, with complex themes that nonetheless allow soloists plenty of room for maneuver. He wrote three of the numbers on Code Red, including the punchy mainstream modern title track. Others are by fellow reedman Cennet Jönsson and pianist Jacob Karlzon. Most successful is Jönsson's attractive ballad "Cats and Dogs , which goes through several mood shifts. Both song and arrangement display a great sense of fun, something for which Sweden is otherwise rarely famous, with Vincent Nilsson's highly original "talking trombone bringing to mind Dickie Wells on valium. The other songs are less clearly defined. Ensembles build and build to dramatic lulls. Highlights: a nicely concise trombone dialogue between Nilsson and Ola Åkerman on Albin's "Going Bananas and Jönsson's lovely, non-Dolphy bass clarinet work on "Subconscious C .