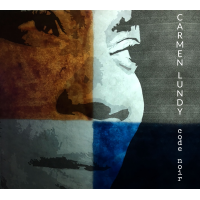 Being a genuine jazz singer requires a dedicated focus on sincerity, enhanced individuality, and a commitment to honoring tradition. With Code Noir, songstress extraordinaire Carmen Lundy reveals herself as a gifted griotte, a female singer of praises, exploring the musical and emotional realms encompassing the African diaspora through the music of Black America.

As a source of reference: Code Noir —Black Code—was enacted by the King of France, Louis XIV in 1685, to decree that is was illegal for Negroes to integrate into white European society. This racist law was applied in French colonies in the Caribbean (1687), and Louisiana (1724). By choosing this controversial law as a title for her record, Lundy not only recognizes the trials and tribulations of her ancestors, but also reflects on America today. She stands as a voice against injustice, revealing the disparity of the world at large.

Besides her inimitable vocal abilities, Lundy is also a prolific composer whose repertoire of original material continues to expand. Her songs flow seamlessly from the serious aspects of social/national concerns, to romance, depicted in songs of love lost and found. Beginning with the latter, "Another Chance," is, as expected, about giving love and hope an opportunity to thrive again, as two lovers stand at the emotional crossroads. On the following number, she firmly believes that it's better to "Live Out Loud," than never live at all, amen to that.

Though Lundy sounds like no one, with her position and statements on racial conditions she is following the examples of Nina Simone and Abbey Lincoln, two iconic jazz musicians who felt obligated to express their opinions on the persistent problems of civil rights and unrest. "Black And Blues," also invokes the protest and resist style of Gil Scott-Heron, as she runs down the underlying situations leading to the Black Lives Matter movement, and it's continuing cause and effect. This track is highlighted by spot-on contemporary drumming by Kendrick Scott, augmented by bassist Ben Williams.

Lundy, is attuned to the power of the human spirit, and "Whatever It Takes," can be applied to any circumstance that one can encounter, following the principle of positive energy. Her straight ahead jazz leanings are evident on "Afterglow," an up-tempo bopper where pianist Patrice Rushen does some fantastic accompaniment, leaving room for guitarist Jeff Parker to solo, Lundy improvising on her scatting. The exotic allure of Hawaii is the idyllic setting for "The Island, The Sea, And You," played with a subtle Latin tinge, sung as an ode to a love of a lifetime. There is an even balance of tracks on the record dedicated to romantic relationships in various stages, "Second Sight," I Keep Falling," "I Got Your Number," and "You Came Into My Life," are proof that the protagonist is in love, the titles sketching out the obvious. Lundy's voice travels smoothly in the lower registers, yielding a controlled, articulated moaning, deeply rooted in the blues.

Lundy is, and has always been proud of who she is and where she came from, "Have A Little Faith," and "Kumbaya" performed as a nod to her African heritage. Originally meant and spoken as "Come By Here," she derived this idea from the Gullah language of the Angolans, which were brought to the Carolinas; whose spirit and contributions to the local black experience are acknowledged.

On this, her fifteenth album as a leader, Carmen Lundy continues to fortify her legacy as a visionary jazz singer/songwriter whose catalog of over one hundred songs, reveals an impressive body of work. Her commitment to raising awareness on important issues combined with an ability to express the most intimate of human emotions has been a maturing process stemming from an innovative dedication to her art. She delves deep into her soul for inspiration, her songs offered as a plea to humanity that we can, and must, do better.

Another Chance; Live Out Loud; Black And Blues; Whatever It Takes; Afterglow; Second Sight; The Island, The Sea, And You; I Keep Falling; I Got Your Number; You Came Into My Life; Have A Little Faith; Kumbaya.