By Jim Santella
January 7, 2007
Sign in to view read count 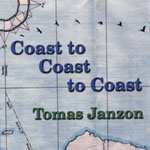 A guitarist with much energy and a thirst for new horizons in jazz, Tomas Janzon continues to find new paths to that end. He's a jazz purist who reveres the past while hooking it up with jazz's leading edge. The soft strokes of his guitar melt away while delivering lyrical melodies one moment and creating fire in the heart of his audience the next. At his frequent live appearances, Janzon captivates everyone and won't let go.

Coast to Coast to Coast was recorded by three of Janzon's bands: one in New York, one in Los Angeles, and one in Stockholm. Hence, his album's title stretches across the Atlantic Ocean to the Pacific Ocean and the Baltic Sea.

The personnel, listed below, are grouped so that William Henderson, Jeff Littlteton and Tony Austin help interpret four pieces in LA, while Ken Filiano and Ben Dixon work with the guitarist in New York, and a rhythm section of Birger Thorelli, Lars Ekman and Ali Djeridi complete his Stockholm sessions. All selections are the guitarist's original compositions.

Janzon's guitar passionately and gently weeps on "Four AM." He nods gracefully to Wes Montgomery on "Wescology. "Urgencity, interpreted by his Los Angeles band, recalls the spirit of Miles Davis, while "The Blue Jay takes his New York trio for a walk in the park. Then, exploring the other side of New York city life, the trio plunges head first into "Sanding with a gruff exterior.

Janzon is quite at home with jazz's tradition, while he finds cause in each selection for creative exploration. As long as world travelers such as him continue to seek new and refreshing means for communicating jazz, we've nothing but blue skies ahead. Coast to Coast to Coast comes recommended for its wholesome glow and creative fires.

Urgencity; Sanding; The Croak; Wescology; Diminued; Four AM; The Hearness; The Blue Jay; The Day Before; A Week From Now.