BY ANTHONY SHAW
November 16, 2010
Sign in to view read count 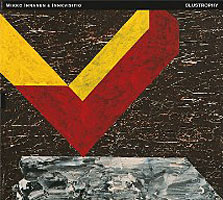 There can be something as obtuse about the artist in person as there is about his music. From the opening blast of his second luxuriously produced album for TUM, it's obvious that woodwind and reed multi-instrumentalist Mikko Innanen is playing mind games with his audience, which may please or tease you.

The tunes represent quite a cavalcade of moods and arrangements, let alone instrumentation. This is partly the result of Innanen's own interest in pushing the sonic envelope of his instruments beyond any standard in order to express his extraordinary range of tonality. Live performance sees the band performing on everything listed on the cover—whistles, toy clarinets, keyboard, drums and, of course, a broad range of saxophone—as well as a small sack of empty tin cans, which are occasionally hit, dropped or even thrown willfully around the stage. The message is that this is music on the cusp of performance art, of which, when taken very seriously, seems to be just one of Innanen's many jests.

The source of such an array of sound is Innanen's vision, but in a band which now features three saxophones, the role of Seppo Kantonen's keyboards is critical to that vision. Along with drummer Joonas Riippa, this inner trio forms the core around which their leader's compositions orbit. Kantonen possesses a remarkably broad electronic palette, from straightforward bouncy keyboard bass to the full spectrum of computer generated psychedelia. In the process of composition, as in performance, his multicolored backdrop or accompaniment plays a key role in characterizing the nature of this band—supremely experimental within a clearly structured approach.

As an album, the overall effect may be uneven, but it's a long a varied trip, as on "Vraa-Tender," a play on raw/tender contrast and location in Denmark where it was composed, or "A Panoramic View from the Top Floor," where periods of minimalistic calm evolve into a teasing cacophonous madness, before Innanen throws in a deft and semi-familiar lick to stop things from spinning right out of orbit. Sweden's Fredrik Ljungkvist, and Germany's Daniel Erdmann—originally guests but now fulltime members—are cut from Innanen's same experimental cloth, having both swum in the deepest free waters that northern Europe has to offer. Their roles are definitely subordinate, with Innanen taking all composer credits save one (and two shared with the trio), but they do more than simply reinforce his intention to explore the saxophone's furthest limits of sound and composition.

Like his first album, Paa-da-pap (TUM, 2007), where second saxophonist Timo Lassy broadened Innanen's palette, this is an album of fun but not frivolity. The musicianship and recording quality are both immaculate, though on this disc Kantonen's soundscapes are set for the heart of space as opposed to the previous, live disc's variety of pace.