BY MARK CORROTO
December 2, 2006
Sign in to view read count 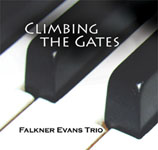 This recording by pianist Falkner Evans is a jazz critic's guilty pleasure. Sure, we are supposed to be combing the bins for the latest greatest high-wire jazz act. But sometimes a rock-solid traditional performance grabs hold of your ears and smiles result.

Such is the case of this Oklahoma-born artist turned New York resident. His playing bears the influences of Tommy Flanagan, Kenny Barron, Horace Parlan and Mulgrew Miller. Steeped in the language of jazz piano, Evans delivers an easy swing and grace, accompanied by two solid veteran sidemen. Both drummer Matt Wilson and bassist Cecil McBee accompanied Evans on his first disc, Level Playing Field (Metropolitan, 2001). But they are far from window dressing—the playful Wilson and the powerful McBee cover the tunes like a long-standing working band covers the familiar.

To gauge the performance, catch a piece of the standards Evans has chosen. He plays with Rodgers and Hart, Thelonious Monk, Sammy Kahn and Milton Nascimento. Monk's "Ask Me Now is dressed up and "marched" from the start with a bit of sentimentality as its theme. The pace picks up with "October, Evans displaying a strong left hand on the keys. His touch, though, is never heavy-handed. Witness the solo effort on the standard "I'm Through With Love, where his open approach, in a classic storytelling mode, is sweet without being saccharine.

Five of the tracks here are originals. When Evans is paired with McBee and Wilson, he's revealed not only as a skilled pianist but also a fine songwriter. The title track and "Talking Rocks are solid swingers, both with a flair for slight time changes and the essence of jazz... dare I call it joy?