BY ANDREY HENKIN
December 14, 2005
Sign in to view read count 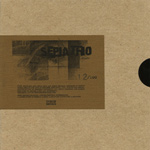 Cleft's genre comes up as "unclassifiable in iTunes. While this is a little bit of a stretch, the Sepia Trio's mix of disparate energy music traditions, most audibly The Fringe, is impressive. Seth Meicht (sax), Brendan Dougherty (drums, electronics), and a new bassist, the much older Akira Ando, recorded Cleft in Dougherty's adopted home of Germany, both live and in the studio.

Just when the opening ten-minute "Losgelassen leads a listener to expect an album of aggressive sax-dominated free blowing, "Pre-moan, at just over one minute, confounds with an industrial sonic wash. The following "Moan, back up to eight minutes, is more in the mold of the opener, but with very interesting modulating long tones in its initial salvo. "Untitled is the sister piece to "Pre-moan, another electronic exploration led by Dougherty.

The final two cuts of Cleft, also the album's live recordings, are "Poultney and "Encoure. The first piece is substantial, close to eighteen minutes of the kind of brash force and vigor that bands from the aforementioned Fringe to newer groups like The Thing search for relentlessly. This segues, with a brief aside of audience appreciation, into the most melodic tune of the album. Nothing fancy, just a catchy vamp that allows the Sepia Trio to unload in under two minutes.