BY MARK CORROTO
November 19, 2007
Sign in to view read count 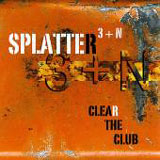 From the files of "what would Miles Davis be doing if he were alive today, and it isn't scratching at the lid of his coffin, comes the mixed/remixed recording from the San Francisco Bay Area band of Dave Barrett, Myles Boisen, and Gino Robair aka The Splatter Trio.

Formed in 1987, The Splatter Trio became the West Coast version of John Zorn's various New York Downtown bands. Freed of the NY sphere of influence, its music was always a bit less serious-minded. The trio was very comfortable switching between Braxton, The Minutemen, and world music. After 1995, The Splatter Trio seemed to exist only in a virtual world of studio manipulated releases including Hi-Fi Junk Note (Rastacan, 1995) and this session of pieces.

Waiting twelve years between releases requires patience, but Clear The Club is a reward worth waiting for. The skeleton of this project is a series of studio jams by the sax/guitar/drums trio, recorded between 1993 and 2007. The takes were then overdubbed and manipulated by invited guests. The Miles Davis 1970s connection is inferred, and The Splatter Trio even covers his "Selim and present "Teo, a reference to longtime Miles producer Teo Macero. Besides the screaming opening track and the very noisy "Stares At The Sun, the central theme of this recording is a groovy-funky jam session. The music, although slyly packed with anarchic notes, is genuinely enjoyable.

The musicians bounce between the computer-animated "Glitchfarben, the heavy metal "Nevada, and the funk marches "Michaelle's Theme and "Butter Churner (3/4/5). What you find here is a party record. A noisy, flame-retardant, very busy party album.