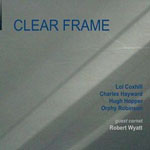 Bassist Hugh Hopper and multi-instrumentalist Robert Wyatt have intersected on a number of occasions since playing in legendary British group Soft Machine nearly forty years ago, but they've rarely worked together in as free and experimental a context as Clear Frame. This improvisational collective features, along with the intrepid Hopper, the equally fearless Lol Coxhill (soprano saxophone), Charles Hayward (drums, keyboards) and Orphy Robinson (vibes, steel pan, percussion). Wyatt's guest appearance on several of these all-improvised tracks is an inspired choice (one prompted by Wyatt himself when he introduced the group at a 2004 jazz festival), and while he's been pushing the boundaries of the cornet for decades, he's rarely had the opportunity to take things as far out as he does here.

Hopper's earlier collaboration with Hayward on Numero D'Vol (MoonJune, 2007) provides some context for positioning this group, but the less conventional instrumentation of Clear Frame—and a collective résumé that includes work with everyone from free improvisers Evan Parker and Fred Frith to acid jazzman Courtney Pine—makes this recording a more challenging listen.

Hopper remains committed to groove, albeit of the most abstruse kind. "Paperweight" even swings along semi-amiably, at least at the start; but the bassist soon ventures into a series of unexpected chords, Hayward loosens up, and Robinson's vibes blend both staggered rhythms and ethereal atmospherics. Even so, it's Coxhill's soprano and Wyatt's surprisingly deep cornet—sounding, at times, rather like a trombone, and often sounding as if he were far off in the distance—that ultimately draw the rest of the group into freer territory, where Hopper and Hayward continue to provide an irregular pulse, one that can shift on a moment's notice.

Robinson's steel pan provides an unusual backdrop for Wyatt on the opening "Clean Slate," with Hopper's slide bass and Coxhill's almost moaning soprano creating an unsettled ambience anchored by Hayward's restrained brushwork. "Tin Plate," by contrast, begins aggressively, Hopper's trademark fuzz bass paired with Hayward's more tumultuous kit work. It's a fifteen-minute exploration of sonic extremes, emergent rhythms and some of Coxhill's most inspired playing on the date, suddenly coalescing into a persistent rhythm and dramatic textural about-face when Robinson switches to vibes. Dissolving once more into darker territory driven by the kind of brooding bass line that's another of Hopper's trademarks, the number winds down curiously, with an up-tempo groove propelled by Hayward and Robinson's percussion, with unpredictable shifting of emphasis taking place around the group.

Collective improvisation is inherently risky; even more so when dealing with a group this size. But while the music of Clear Frame is often dense and difficult to absorb, Coxhill, Hayward, Hopper, Robinson and Wyatt are clearly all working with their ears and minds wide open. They're equally observant of the need for space to let this kind of spontaneity breathe, making Clear Frame a debut that will appeal to those who like their music with no small supply of hard surfaces and sharp edges.