BY C. MICHAEL BAILEY
March 15, 2015
Sign in to view read count
With the traditional music industry in shambles, the larger labels are repackaging their deep catalogs as never before, releasing well-conceived box sets that are modestly priced for the amount of music offered. Here are two from Warner Classics that make me want to yell, "Yeehaw!" (In the southern classical music vernacular, that is.) 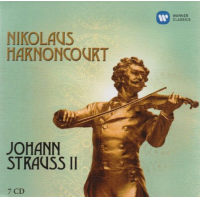 When considering Austrian period-performance conductor Nikolaus Harnoncourt, the music of Johann Strauss the younger is not what comes to mind. Rather, Harnoncourt's Bach corpus with the period-instrument ensemble Concentus Musicus Wien and more recently, his cornerstone survey of the Beethoven symphonies with the Chamber Orchestra of Europe plus the Beethoven piano concerti with Pierre-Laurent Aimard, might more quickly come to mind. However, Harnoncourt has never been trapped in any particular era and he has always had a soft spot for is fellow Austrian Waltz King.

Johann Strauss II is an embarrassment of Viennese riches with performances of two Strauss operas, Die Fledermaus with the Royal Concertgebouw Orchestra and Der Zigeuner Baron with the Wiener Symphoniker. Harnoncourt's appreciation for Strauss, ..."with no added syrup" produces a brand of light classical music brought into strange focus, elevating Strauss to a level above Vienna novelty, where he belongs. Sparkling and effervesant "Tales from the Vienna Woods" and "The Blue Danube." 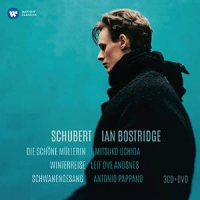 During the 1990s, English light tenor Ian Bostridge made his recorded way through Franz Schubert's three major song cycles: Die Schone Mullerin, Winterrise and Schwangesang. Warner Classics saw it fit to put all three together in what may be the finest collection of Schubert sung by a tenor ever. Bostridge one-upped the ante on the issue with his 2014 publication of Schubert's Winter Journey: Anatomy of an Obsession (Knopf). Winterreise is the centerpiece, necessarily, if for no other reason that the cycle has so many notable competitors. So important is Winterreise that the performance, with pianist Leif Ove Andenes, is also provided on DVD.

That noted, Die Schone Mullerin is recorded with age appropriate phenom Mitsuko Uchita, whose 1990s Mozart had the music writing world all a twitter. Bostridge is very fine, but Uchita brings an Haydnesque grace to the accompaniment that reall complements the recording. Schubert had a sense of humor and Uchita captures it for Bostridge to use. This set is modestly prices and offers a grand introduction to Schubert's lieder corpus. Drink deep, or taste not the Pierian spring...