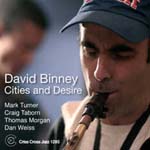 It's no surprise that altoist David Binney could come up with a record as evocative as Cities and Desire, but it is surprising that he could come up with it in a single-day session. Like last year's Criss Cross disc Bastion of Sanity, his new album is more of a flat-out blowing session than his other efforts. Even the moodier and more ambient Out of Airplanes (Mythology, 2006), which included a number of free improvisations edited in post-production, was generally more compositionally focused.

That's not to say there's any less attention to writing on Cities and Desire—or, with its uninterrupted flow, less strong a narrative than that on Out of Airplanes. But unlike the Out of Airplanes group, this is a gigging band, and it shows. Dan Weiss—one of the most inventive young drummers to emerge in the past decade—and bassist Thomas Morgan have been a part of Binney's regular Tuesday night gigs at New York's 55 Bar for nearly five years. Morgan and Weiss make an incredibly malleable and responsive rhythm section; Weiss' interest in Indian music also contributes to the international flavor of this album. The increasingly ubiquitous pianist Craig Taborn and perennially underrated but always masterful saxophonist Mark Turner, while not permanent fixtures at Binney's weekly gigs, did play several gigs with him, Morgan and Weiss before hitting the studio.

Cities and Desire is an aural travelogue, documenting cities that have become regular stops for Binney when he has ventured out of the Big Apple. Four of the songs have solo introductions that set the context for what's to come. "Intro to Toronto" begins with Weiss on tabla. He's no dabbler on this difficult-to-master instrument, as he's already established through his work with guitarist Rez Abbasi. He remains on tabla through Binney's statement of the theme to "Toronto" and the beginning of Taborn's thoughtfully constructed solo, only switching to a regular kit after Morgan enters.

"Lisbon" is pure composition. Weiss and Morgan's staggered funk contrasts Taborn's arpeggios, which form the foundation for Binney and Turner's octave-apart unison lines. But it's the anomaly on an album where Binney's distinctive brand of memorable lyricism acts more as rallying point for the band, spaced out between open-ended solo passages where the rules of engagement are more elastic.

"Rome," which begins with an introspective solo from Morgan, revolves around an irregular-metered but simple and staggered theme that dissolves gradually into the greatest abstraction to be found in any of Binney's work. While he usually eschews prodigious displays of technique, Binney's solo is one of his most dramatic on record, while Taborn's angular, Cecil Taylor-esque solo ends abruptly—indicating that, as free as things are, there's still structure at work.

While Binney's emergence as a composer and player of note has been gradual, things have been heating up for him the past couple of years. With the one-two punch of Out of Airplanes and Cities of Desire, Binney's combination of detailed writing and unfettered improvisation has never been better—or more inevitable.