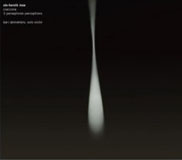 A two-disc solo violin recital can be challenging enough, but when it's the music of Norwegian composer Ole-Henrik Moe (b. 1966), it enters an entirely different realm altogether. A student of 20th Century musical modernist composer Iannis Xenakis, Moe's writing explores the subtle variations of overtones and harmonics instead of overt melody and conventional form. Ciaconna / 3 Persephone Perceptions collects two extended, multi-part works, performed by violinist Kari Rønnekliev, representing 85 minutes of extraordinarily demanding, but ultimately rewarding music.

The fourteen-part "Ciaccona" (2002) begins with seemingly random, jagged punctuations that gradually expand, but are more about texture, tone and sonic breadth, resulting from sometimes subtle, sometimes not-so-subtle variations in left and right hand pressure. Microtonality, achieved through careful exploration of overtones and harmonics, provides additional variation, as the 45-minute piece moves from jagged extremes to brief moments of silence that create deep tension and anticipation for what's to come next. While the structure of the piece is elusive, it is there nevertheless; revealing itself more when looking for it is avoided, and when the fourteen miniatures are absorbed as a whole.

Silence is an even greater component of the three longer components of "3 Persephone Perceptions" (1995-1996), where Moe's writing can be likened to that of Morton Feldman's—except that Feldman's music, regardless of how long-form it is, largely retains a degree of tonality. That said, there is a stronger allegiance to melody here, although Moe continues to mine the subtlest of harmonic variations, with the sections evolving in a gradual but ultimately inevitable way. The second part is the most relentless, with Rønnekliev bowing the strings with a largely consistent pulse throughout its twenty-three minutes. Harmonics and keen dynamics, which fade in and out of brief silences, provide the emergent form. The third part begins by exploring microtonality between notes on two adjacent strings, but quickly fades into harmonics so imperceptible in their near-silence that, when occasional punctuations occur, they're surprisingly dynamic, despite being relatively subtle themselves.

Kari Rønnekliev''s virtuosity in performing these two less-than-approachable pieces may be as difficult to discern as the underlying forms themselves. But it's the degree of control that the violinist demonstrates throughout that is, in itself, most remarkable. Ciaconna / 3 Persephone Perceptions may not be for those accustomed to conventional form, melody and pulse, but it's an album that rewards the patient listener with a unique experience, where delicate nuance ultimately expands into a surprising soundscape.