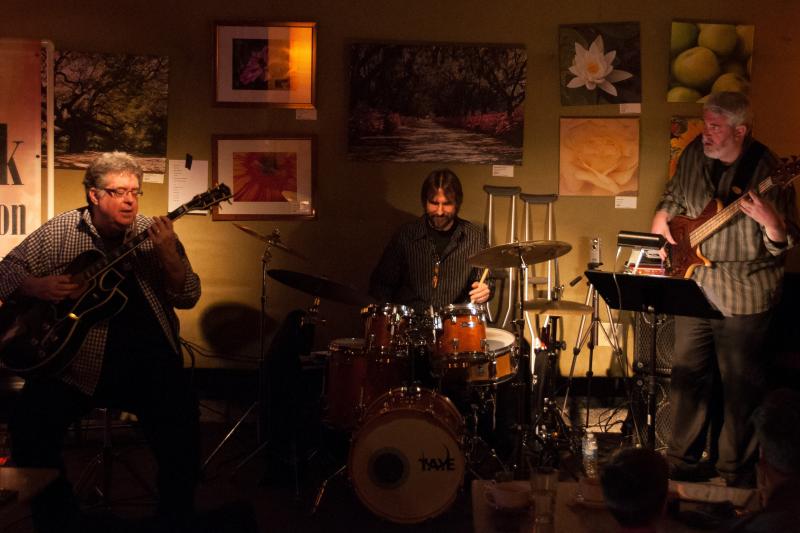 The Chuck Anderson Trio marked a long overdue end to the winter with their first performance of the 2015 season. The trio, consisting of guitarist Chuck Anderson, bassist Eric Schreiber, and drummer Ed Rick played at Melodies Café in Ardmore, PA. An intimate venue, Melodies was filled with an attentive and informed jazz audience.

The trio came out strong, starting with "Bag's Groove" and "Blue Bossa." The energy and artistry were immediately apparent, expelling the winter doldrums and engaging the audience. The band tore through the tunes, led by Anderon's bluesy, soulful solos and Rick's propulsive and colorful time keeping, fills, and solos on "Blue Bossa." Even more impressive, Rick played the show injured, hobbling out to the stage on crutches. However, his playing remained inspired and energetic, seemingly unaffected by his physical condition. Schreiber's bass playing was the backbone, with his riffing and walking basslines holding down the low end, and his virtuosic solos demonstrating the full capacity of the instrument.

"I Remember You" provided a moment for the band and audience to catch their breath, before the band launched into a ripping rendition of "A Night in Tunisia." The tune itself sounded great on the guitar, and the solos and percussion work excelled. "Moanin'" followed, lending a decisive gospel vibe to the preceding blues and Latin feel prevalent throughout.

Again, the band brought the pulse of the room back down with a gentle rendition of "Polka Dots and Moonbeams," before giving one last foot-tapper of the set with the original "Jamey's House of Samba," from the 2013 album Night Hawk.

The second set blended more jazz standards with Anderson's original compositions, and introduced some tunes not previously in the trio's repertoire. Neil Hefti's "Cute" and "Somewhere" from West Side Story were two of the new additions to the Chuck Anderson Trio concert experience.

"God Bless the Child" and Wes Montgomery's "Four on Six" broadened out the tour of jazz offered on this night, and were both fine vehicles for Anderson and Schreiber's solos.

The remaining three tunes were Anderson originals, featuring the 6/8 "Pirouette," the newly unveiled modal burner "Going Home," and a spontaneously composed improvisational piece for solo guitar, which is a mainstay of Anderson's concerts.