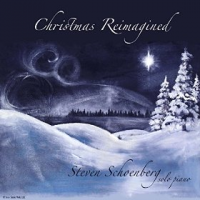 Categorization is an anti-entropic effort to describe similar, but not equal, things for comparative reasons. So was my thinking when I began my review of pianist Steven Schoenberg's recording Steven Schoenberg Live: An Improvisational Journey (Quabbin Records, 2009) with:

"Like the face of Helen launching a thousand ships, for better or worse, Keith Jarrett's 1975 Koln Concert (ECM) inspired a like number of improvisational piano recitals (half of which were ultimately Jarrett's own) and the entire genre of "New Age" solo piano music. This spontaneous creativity is, at best an inspiration, and at worst, a bore."

This was my mostly failing attempt to provide potential listeners with an idea of what they were in for when they happened to spin Schoenberg's disc beneath the magic laser. I never intended "new age" as a pejorative, only a descriptor to provide context. New age and ambient music have their place and I have enjoyed many recordings classified as such.

But the trend, particularly in jazz and other improvised music, has been for finer and finer "genre" granularity, music that defies ready categorization. That said, I will refrain from such in describing Schoenberg's current recording Christmas Reimagined so inelegantly. Schoenberg takes on a repertoire so intolerant of poor presentation that lesser talents have clotted cut-out bins with their bathetic and often wholly contrived recordings. Not so with this recording.

What Schoenberg has accomplishes with Christmas Reimagined is a finely crafted history of piano performance using a sturdy, if unforgiving, body of songs as his vehicle. For instance, the opening "We Wish You a Merry Christmas" is played with a Liszt left hand transcribing Schubert and a solid Bill Evans right, playing rhythmically crossways. "Carol of the Bells" is impressionistic and dynamically kinetic, with Schoenberg practicing a dramatic volume modulation. Here, Schoenberg approaches George Winston's sublime December (Windom Hill, 1990).

Schoenberg hits his stride with an all-American "Here We Come A-wassailing," where he begins tentatively, stirring in broad major chords full of the blues and church. His virtuosity swirls in this brief 1:39 song, a study in perfect arrangement and programming. "The Christmas Song" is busy with Schoenberg building cheer musically and dynamically, in an Oscar Peterson sort of way, were Peterson reined in by Gene Harris's good taste. "The First Noel" is delivered with the clarity preceding a dream while "God Rest Ye Merry Gentlemen" is sonically orchestral and closely intimate at the same time.

Schoenberg is an accomplished improvisatory pianist who is able to sit down and summon a lifetime of experience making it come to attention and order three minutes at a time. Christmas Reimagined is a collection of refined miniatures played with grace and humor.

We Wish You a Merry Christmas; Carol of the Bells; Here We Come a- Wassailing; Little Drummer Boy/Joy to the World; The Christmas Song; We Three Kings; God Rest Ye Merry Gentlemen; Have Yourself a Merry Little Christmas; My Favorite Things; Do You Hear What I Hear?; Auld Lang Syne; Angels We Have Heard On High; Silent Night; I'll Be Home For Christmas.