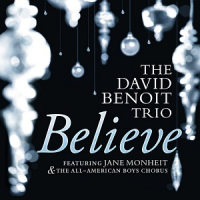 What Believe is, is a slick updating of Vince Guraladi's A Charlie Brown Christmas (Fantasy, 1965), which celebrates its Golden Anniversary this year. There is good, as well as bad, in that statement. The newly-minted holiday compositions "Believe" and "Just Like Me" smack a little too much of standard Adult Contemporary fare, doubtless as they were intended to. These songs have their appeal and will appeal to many, but they are also the only barriers to what is otherwise a superb rendering of an American Classic. The remainder of the recording is a tightly focused updating of music that hold great nostalgia but is presented in such a fresh and refreshing manner as to make it sound completely new. The disc's highlight is the programming fulcrum, "Guaraldi Medley," which condenses the whole of a A Charlie Brown Christmas into eight bright minutes... sans "Linus and Lucy," whose absence barely registers while Monheit sings a swinging "My Favorite Things" and closes the disc with a fine "Christmas Song." The All American Boys Chorus make proud the ensemble pieces and Benoit's trio is nothing but elegant. 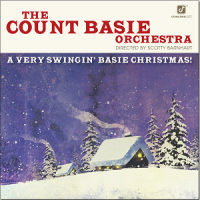 Next year, 2016, is the 80th anniversary of the founding of the Count Basie Orchestra. William James Basie (1904 —1984) formed his first big band from the ashes of Benny Moten's big band in 1936. Basie led this band, in one configuration or another, until his death from pancreatic cancer at 79 years old. Basie's legacy has been durable and long-lived. A Very Swingin' Basie Christmas! is the band's first full-length, holiday recording, brought together under the direction of Basie-period trumpeter Scotty Barnhart and produced former Basie drummer Gregg Field. Arrangements were provided by Basie associates Sammy Nestico and Gordon Goodwin. The recording features vocalists Johnny Mathis, Ledisi, pianist Ellis Marsalis, and tenor saxophonist Plas Johnson (most noted as the soloist on Henry Mancini's "The Pink Panther Theme"). Included on five of the eleven selections is Little Rock, Arkansas-native James Leary, 1996 inductee into the Arkansas Jazz Hall of Fame. Lear performed with the Basie Orchestra in the 1980s. He was specifically invited to take part in this recording.

The results remain the Basie Sound thirty years after the pianist's death. The very definition of swing can be heard from the Basiesque opening of "Jingle Bells" to the final notes of "I'll Be Home for Christmas." It is gratefully acknowledged that this is the first seasonal offering by the band. There is no point wearing out a good thing. Merry Christmas, All.