By David Rickert
October 10, 2011
Sign in to view read count 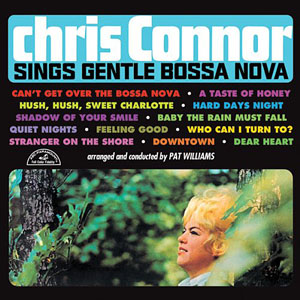 If you were a jazz singer in the mid-sixties, chances are you recorded a bossa nova album. It might have been great, it might have been terrible, but it most likely fell somewhere in-between. You may not have wanted to record one, but bossa nova was too popular a fad to resist, and not many people were buying jazz records anyway. And, at least, bossa nova records allowed you the opportunity to use your jazz chops on something deliberately commercial.

Chris Connor was one of those that recorded a bossa nova album; an underappreciated jazz singer in her 1950s heyday, encouraged by producer Kenny Greengrass to record a couple of pop records to try and capture some of the pop market. Neither sold well; obviously kids didn't want to hear her doing The Beatles tunes, and her fans didn't either. But with the benefit of hindsight, Connor's first foray into the pop market, 1965's Chris Connor Sings Gentle Bossa Nova is a pleasant, if not overly captivating, album of sixties kitsch.

Surprisingly, there aren't any classic bossa nova songs on here—no "Quiet Nights," no "Desifinado"—but, rather, contemporary songs done in the bossa nova style. Conductor Pat Williams, of course, includes guitar in his arrangements to provide the bedrock, but also incorporates modern touches like harpsichords and flutes, drawn directly from soundtracks and AM radio. The first four tracks are the songs everyone knows, and while neither Connor or Williams is able to bring anything remarkable to "A Hard Day's Night" and "Downtown," "A Taste of Honey" is excellent, and "The Shadow of Your Smile" is a decent version of a song most people could do without today.

The rest of the album works much better; the more obscure material allowing Connor and Williams more freedom to play around with the arrangements and the delivery of songs that haven't since been imprinted in definitive versions. Many of these songs come from movies (the most popular source of hit songs at the time) along with a few from the stage. "Hush, Hush, Sweet Charlotte" is a simple, but gentle and lovely song, "Dear Heart" is an underappreciated Mancini tune (and coincidentally both were nominated for Academy Awards along with "The Shadow of Your Smile").

Connor's singing throughout the record is, as expected, excellent; either bringing the material up a notch in quality or rising above the stuff that doesn't quite work. Her gentle delivery is as warm as a Brazilian breeze, and Williams has carefully crafted arrangements that evoke the bossa style while adding pop flourishes. The album sounds quite dated today (as most bossa records do), but Chris Connor Sings Gentle Bossa Nova is a quiet little gem, not the best thing Connor (or Williams) ever did, but one that certainly deserved better that the cold reception it received upon its release. It's ironic that a record so much a product of its time may have needed over forty years to find an audience.

A Hard Day's Night; Downtown; A Taste Of Honey; The Shadow of Your Smile; Feeling Good; Who Can I Turn To; Can't Get Over the Bossa Nova; A Quiet Thing; Dear Heart; Hush, Hush, Sweet Charlotte; Baby the Rain Must Fall; Stranger On the Shore.