By Bruce Lindsay
September 17, 2012
Sign in to view read count 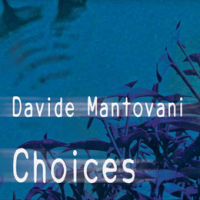 Strip out every other musician from the tunes on Choices and Davide Mantovani's bass lines are impressively attention-grabbing on their own. Put the other musicians back in and Choices becomes a richly-hued collection that takes inspiration from almost every corner of the globe.

Mantovani moved to London from his native Italy in 1991 and has an impressive resumé including work with saxophonist Andy Sheppard, Natacha Atlas and guitarist Antonio Forcione. He's also a talented composer, writing or co-writing all but one of the tunes on this album. But his discography as a leader is sparse, with only two albums prior to this one.

To which choices does his album refer? There are many possibilities: his country of residence, collaborators, selection of instruments, musical styles, or tunes. One, or all of these choices, may be the inspiration for the album's title. Mantovani's musical inspirations include European classical music, Senegalese rhythms, Brazilian dance and closer to home, the imminent arrival of guitarist Guillermo Hill's new daughter: Hill and Mantovani recorded "Esperando Olivia" in the last days of Hill's wife's pregnancy.

Mantovani's bass, electric or acoustic, is at the heart of these tunes. "Heart" is a particularly appropriate term to use, for his playing is at the music's emotional center as well as its rhythmical one. Mantovani's fluid, lyrical playing is to the fore on the lovely "Rio Déjà Vu," which also features Gustavo Marques' silky vocals, but for much of the time his instrument is deeper in the mix and he gives the spotlight to his collaborators.

Choices is an emphatic demonstration of Mantovani's talents as a player and composer. Its combination of rhythms and styles is impressive without being pretentious. Above all, the music has charm by the bucket load.