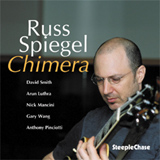 Guitarist Russ Spiegel has come a long way from the time when he was influenced by rock and spent a decade playing that music. The self-confessed latecomer to jazz shows firm grasp of the vocabulary as he takes different forms and builds them into a cohesive unit.

Spiegel wrote six of the tunes on this venture, letting "Cherokee sit between his own compositions. He uses a wide and colorful palette, as he draws on bossa nova, hard bop and rock to paint with his imagination.

Spiegel is an eloquent guitarist. He is lyrical on a ballad and cuts a deep swath when he decides to rock out. More importantly, he constantly develops ideas, never letting interest flag. His band mates tie in well, both when it comes to unraveling their individual permutations and in creating an empathy with each other.

The light airiness of the bossa floats into "Polychrome World. Spiegel unveils the chords and Nick Mancini lays the first notes on the vibraphone, letting the melody seep in and hold there. The beauty of the tune is enhanced by saxophonist Arun Luthra and Spiegel. Spiegel plays the acoustic guitar, his focus on the melodic core; but he sets out in fleet runs and returns only to navigate with a greater deliberation. Luthra is lyrical on the soprano, his notes soaking in the music before he marks his territory with hard, punchy phrases.

Hard bop bleeds into "Chimera. It's a kicker, with David Smith firing a strong fusillade of notes on the trumpet. His forward thrust is picked up by Spiegel, who jumps into the groove and propels it forward, his picking clean and neat. Drummer Anthony Pinciotti is a constant source of energy, as he propels the beat and feeds the front line.

"The Last March has different strands in play over the course of its nearly 12 minutes. It starts out with a march beat, but the martial air is diffused on the cool tones of the vibraphone. The composition continues to remain in jazz territory through the ministrations of Luthra and trumpeter David Smith, the latter particularly inventive in his long individual foray. It is then that Spiegel begins to inveigle himself with some hard rock notes and lets the whole movement roil. The atmosphere becomes heated and charged, and then dips into silence, opening the door for Gary Wang's cooling, single-note runs on the bass to draw Mancini and the horn men back into the fold. A bit of free-form, a harkening back to the original pulse; and it's time to fade out.